WINDSOR
What’s more fun than dressing up your children for Halloween? Your pets, of course. 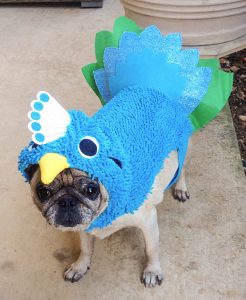 Sweet Pea Cowles is pretty as a peacock for Halloween. She won’t be at the parade, unfortunately, but your pet can be there this morning at 11 by the gazebo on Duke Street in Windsor. — Stephen H. Cowles | Tidewater News

Girl Scout Troop 810 is hosting a pet costume parade today, Oct. 29, beginning at 11 a.m. The lineup begins at the gazebo next to the Windsor library on Duke Street.

Prizes will be awarded for the best costume, best homemade costume and most original.

Jennifer Bak, who’s been helping to organize the event, said that people may bring their costumed pets today. The entry fee is $5 per critter.

Human participants are reminded that all pets must stay on their leashes throughout, and must clean up after the animals. They are also responsible for their pets’ behavior. Children and the animals in the parade must be escorted by an adult.

The Isle of Wight Animal Shelter will have adoptable pets also parading.

Proceeds will benefit the Helping Hand Up Snack pantries for the Windsor school system.

The program was begun last year at Windsor Elementary School. Guidance counselor Marie Matthews had been made aware by teachers that many students aren’t probably getting enough food to eat. Bak had also approached her with a similar idea. Eventually, the decision was made to create and stock a pantry of snacks from which teachers could choose and put discretely in students’ backpacks. The project has grown to get sponsorship from Antioch Church. Bak said on Friday that New Branch Community Church has also gotten on board.

Further, the closet now includes hygiene items, such as toothbrushes and toothpaste and, Bak said, “any other hygiene item that makes the kids feel confident in themselves and excel in school.”

The success of the project has gone to Carrsville Elementary School, Georgie D. Tyler Middle School and Windsor High School.

Bak said she’s learned that students’ grades at Windsor Elementary have reportedly improved by 70 percent as a result of the program. Confidence also seems to be up, while discipline and bullying problems have declined.