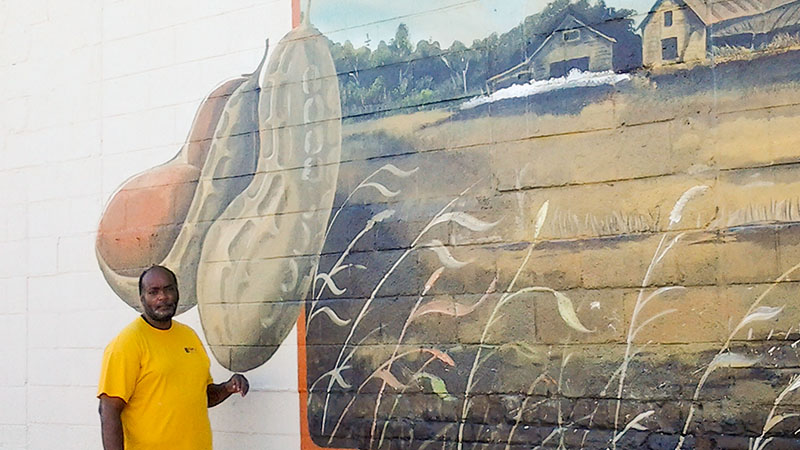 FRANKLIN
The Downtown Franklin Association is looking to paint the town … with a few more murals.

At Monday’s city council meeting, Downtown Franklin Association Executive Director Dan Howe announced that DFA had been awarded a $5,000 grant from Virginia’s Main Streets Program, which will be used to create at least one additional “Color Us Happy” mural downtown.

The DFA had already helped fund the creation of a single mural on the side of the Coldwell Banker building at the corner of Second Avenue and Main Street, painted by muralist Horace “Happy” Mann, which depicts what Franklin may have looked like in 1902.

One of the sites being considered for a mural is the old Leggett building, now owned by the Cutchin family and leased to Gray Fox Electronics.

“So, coming over the bridge from Isle of Wight, you would see it,” Howe said.

“One of our best strategies for driving economic growth in Virginia’s localities is to focus revitalization around historic Main Street communities,” said Gov. Terry McAuliffe in a press release on the grant. “Virginia’s Main Streets Program is a central part of our plan for growing small business ecosystems and homegrown entrepreneurship, as well as bolstering tourism for our towns and cities. We will continue to invest in the Commonwealth’s historic downtown neighborhoods, which play a vital role in local job growth and revitalization, as we build a new Virginia economy.”

Additional sites being considered for murals include the old fire station on North Mechanic Street across from the Franklin Business Center, which is being remodeled as the new home of Jim and Lisa Strozier’s Highground Services Inc., an engineering firm. The Parker Darden Heating and A/C building is also up for consideration.

The owners of each location being considered have all expressed interest in having murals painted on their buildings and are in negotiations with the DFA.

Napoleon Hill, a muralist from Enfield, North Carolina, who has painted many murals in small North Carolina communities such as Conway, is one of the artists the DFA is considering asking to complete one or more murals in Franklin.

“If we get more funding, maybe we’ll be able to do more than one more mural,” Howe said.

One of the ideas being considered is to do a “welcome to Franklin” type treatment with images of the city painted inside the letters. Another idea suggested was to do one of old fire trucks.

Howe expects the next mural to be completed in early spring or summer 2017.

The final decision on which mural idea will go on which building has not yet been made.