FRANKLIN
Data from the National Cancer Institute shows Franklin’s cancer rates are higher than both the state and national averages, and have have been on the rise since 2009.

Of course, Franklin’s total population is only around 8,500, but according to Dr. Christopher Wilson of the Virginia Department of Health’s Western Tidewater District, these figures are adjusted for the city’s relatively small size and should be considered accurate.

The cause of Franklin’s higher rates, however, is up for debate. 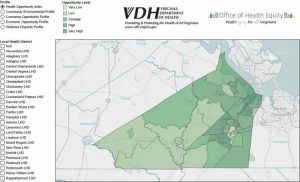 The Virginia Department of Health’s Health Opportunity Index (HOI) shows the city of Franklin as having significantly fewer opportunities for its citizens to be healthy compared with the northern parts of Isle of Wight County. — SUBMITTED

“There are many factors that affect a person’s overall health, including whether or not they might develop cancer,” Wilson said. “Most of the differences can be associated with social determinants of health, which include safe housing, availability of local food markets, access to health care services, access to education, transportation options, public safety, social norms and attitudes, neighborhoods and the built environment.”

To track how all of these factors combined affect the health of Virginians, the Virginia Department of Health uses what they’ve termed the Health Opportunity Index. The index tracks over 30 variables to measure the health of residents at the state, county and independent town/city level and assigns each area a percentage. The higher the percentage, the more opportunities residents of that area have to be healthy.

“The opportunities for health vary across the state, within Western Tidewater, and within the localities that make up the district,” Wilson said. “Franklin and Suffolk, the two localities in the Western Tidewater health district with higher cancer incidence rates in 2009-2013 than the state, have census track areas ranked on the Virginia Health Opportunity Index as very low health opportunity.” 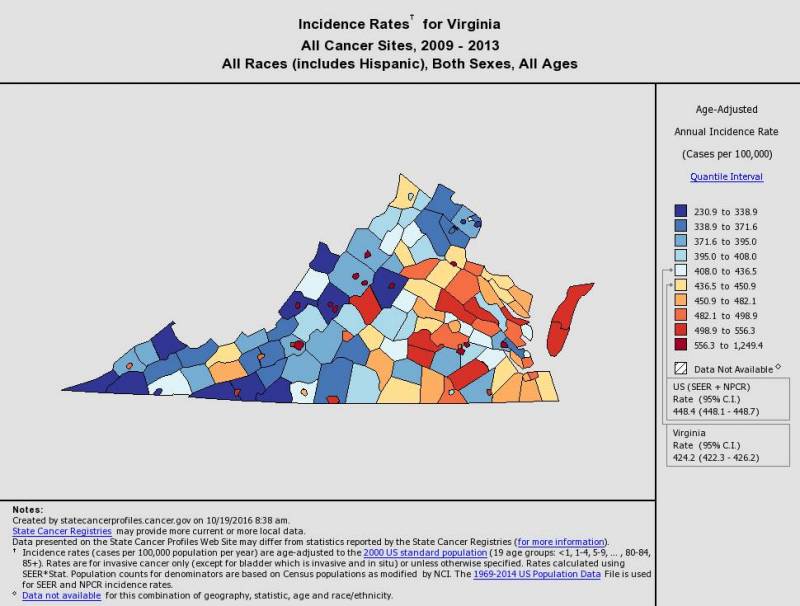 A chart from the National Cancer Institute shows the city of Franklin’s age-adjusted annual cancer incidence rates as approximately 556 cases per 100,000 people based on data gathered from 2009 – 2013. — SUBMITTED

Health opportunities include many of the social determinants that Wilson cited as affecting the likelihood a person will or won’t develop cancer, such as access to nearby health care facilities, safe housing, and access to nutritious food. In communities such as Franklin, with a poverty level over 25 percent, those opportunities tend to be lacking for more residents.

According to an academic paper published by the U.S. Library of Medicine, National Institutes of Health in 2010, working at or living near a pulp or paper mill can in some cases be a contributing factor to higher cancer rates, though Wilson did not know of any data or studies linking the International Paper mill to Franklin’s high rates.

The paper’s abstract states that “pulp and paper mills use a variety of chemical substances potentially hazardous to human health. Compounds of both short-and-long-term toxicological significance are found in workplaces, air emissions and water effluent … While the ability to associate specific chemical exposures with cancer outcomes in the large IARC [International Agency for Research on Cancer] multinational cohort may yet help to resolve the status of some of the many chemicals not currently classifiable as to their carcinogenicity by IARC.”

Wilson added that a person’s genetics, family history and personal choices also play a strong role in determining whether or not cancers will develop.

“Cancer is a name that’s given to a group of diseases that are similar in that normal cells anywhere in the body begin to divide in a disorderly way and spread to other tissues,” he said. “Cancer is a genetic disease caused by errors in the genes that control how these cells function and divide. The errors in these genes can be caused by many sources. One source is our parents, as some cancers are passed through families. Other possible sources include our lifestyle and the environment … Specific known causes of cancer include smoking cigarettes, tobacco use and ultraviolet radiation (sun) exposure.”

Wilson offered a prescription for Franklin to address residents’ various barriers to health.

“Community-wide initiatives to improve the social determinants of health and increase the health opportunities in these areas are likely to improve overall health, including lowering the cancer incidence rates, across the district,” he said.