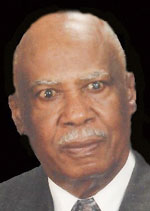 Mr. Taylor was born March 1, 1922, in Ante, Virginia, a son of the late Purdy and Mary Taylor.
He was a 1940 graduate of Hayden High School in Franklin.
During World War II, he served in the US Army as a Sergeant First- Class. After receiving an honorable discharge from the Army, he graduated with BA degree in business administration from North Carolina A&T in 1948.
He married the late Ruby L. Taylor (died in June 2012) in 1975.
His working career included over 15 years as a Philadelphia public school teache,r and 30 years as a supervisor for the postal service, and for a brief period of time owned a dry-cleaner.
Mr. Taylor, accepted the right hand of fellowship as a young man and continued his service to our Lord for many years as a church deacon and in his final years serving at Neabsco Baptist Church in Woodbridge, Virginia.
He loved to listen to gospel music, watch sports, take long drives to the country and give life messages to anyone willing to listen. As a young man, he played several sports and surprised many with his multi-range singing voice. Also, he was widely known as a very devoted husband, father, brother, grandfather, great-grandfather, uncle and cousin, who encouraged high levels of success, sincerity and education.
He is survived by a loving daughter, Joyce Brown and husband (Willis) of Sacramento, California; twin sons, Darryl Taylor and wife (Kim) of Herndon, Virginia; David Taylor and wife (Sabrina) of Woodbridge;, his sister, Carol Taylor of Franklin, Virginia; 12 grandchildren; 23 great-grandchildren; and numerous nieces, nephews and cousins.
His funeral will be on Saturday, Oct. 29, at 1 p.m. in Piney Grove Baptist Church, Franklin, with the Rev. Joshua Speights, Neabsco Baptist Church, Woodbridge, officiating; the Rev. Alfred Brown Sr. is the host pastor. The committal and benediction will be held in Southview Cemetery.
On the day of the service, his remains will rest in church for viewing by noon.
A traditional service with dignity will be conducted by Wm. M. Johnson & Sons Funeral Home Inc., 224 S. Main St.