MINEOLA, N.Y. — Clasteen Bynum, 77, was born on Sept. 20, 1939, in Newsoms, Virginia. She was the fourth of six children. She slipped into the arms of the Lord our Savior on Oct. 7, 2016, at Winthrop University Hospital, due to heart complications. 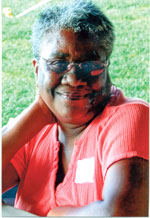 Clasteen attended Hayden High School in Franklin, Virginia, where she won a few dance contests and was a member of the basketball team.

She was a member of Diamond Grove Baptist Church from her youth until she relocated to New York at the age of 18 to start a better life for her and her son. There she became a member of Faith Baptist Church in Hempstead, New York, until her health failed.

There will be a casual memorial on her behalf for relatives and friends at 11 a.m. on Saturday, Nov. 5, at the Sportsman’s Club on South Street in Franklin.