Presidential campaigns through the years 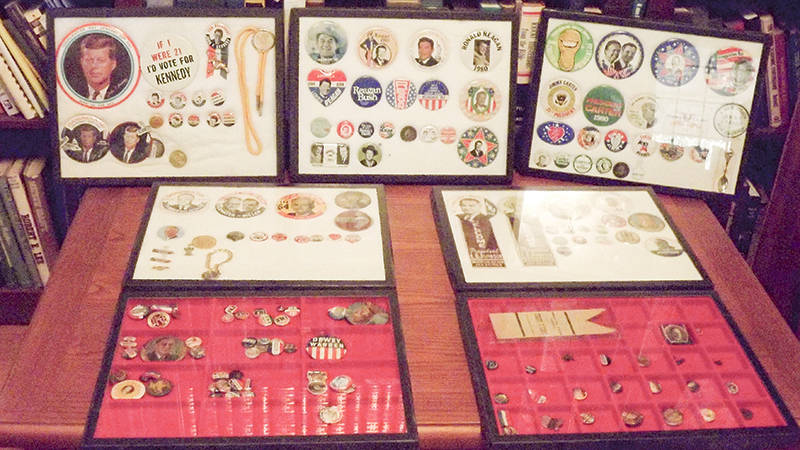 BOYKINS
The year was 1964. Lyndon B. Johnson was running for president against Republican challenger Barry Goldwater, and Boykins resident Jim Vick was in the fifth grade.

It was during that election that the father of one of his classmates, a local Democratic leader and one of the few people in town who was planning to vote for Johnson, gave Vick his first presidential campaign button. Today, that button is displayed proudly in his living room, alongside many, many others.

“I wasn’t a fan of Johnson, by the way,” said Vick, who as a result of that incident became a lifelong campaign button collector. “I just took the button as a favor.”

Now, his collection includes dozens, if not hundreds, of buttons, the oldest of which include a campaign button for William McKinley during the 1896 election, and a badge dating from shortly after the assassination of James Garfield in 1881.

He obtained the older buttons from a dealer in Hillsboro, North Carolina, back in the early 1990s.

“He was a reputable dealer,” Vick said. “There are a lot of fakes and replicas out there. Just like anything you collect, you have to be careful what you get.”

Some campaign buttons are more valuable and rarer than others depending on the candidate’s popularity at the time and the number and variety of buttons that were made, he said.

Vick estimates that an original Richard Nixon button would likely go for anywhere from $5 to $30. Likewise, Jimmy Carter — while popular in the Western Tidewater area for his history as a peanut farmer — had a lot of buttons produced during his campaign and so each individual pin is not that valuable. Campaign buttons and memorabilia for Ronald Reagan, on the other hand, are very collectible.

Vick keeps his rarest and most collectible buttons in his two red display cases, which include several examples of the “I like Ike” Eisenhower campaign buttons, some for Franklin D. Roosevelt, and even a button for Douglas McArthur when he briefly contemplated running for president.

“The only one I don’t have anything for is Harry Truman,” Vick said. “He’s the hardest one to find.”

He admitted that his collection is unlikely to grow from the current or any future presidential election.

“People have pretty much moved away from campaign buttons,” Vick said.

But that isn’t likely to stop him from browsing through flea markets trying to complete his collection of campaign buttons for the 20th century.

“You have to look for these things,” he said. “You don’t find them everywhere.”