COURTLAND
What does it take to live to be 100 years old or more? Some might tell you diet and exercise, others could say drinking and smoking haven’t hurt them. Then there’s having a strong sense of humor or even the right kind of genes. James Scott, who became 102 years old on Saturday, has his own answer.

He smiles and points a finger upward when asked the question.

God, said the Courtland resident, is who has decided he should live so long. 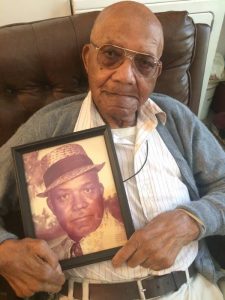 James Scott of Courtland holds a photograph of himself in his 50s. He celebrated his 102nd birthday on Saturday. — Stephen H. Cowles | Tidewater News

“Doing the right thing and living a good life,” Scott added. “I treat everyone the best way I know.”

Since childhood, he’s been involved with a church. He recalled being baptized in the Nottoway River when he was 7 years old, which at the time the family was a member of First Baptist Church in Courtland. Currently, Scott attends New Mercy [Baptist] Church, where Robert Gay is the pastor.

In his life, he has farmed, worked at a sawmill and then as a mechanic for 27 years for Ford. Let’s not forget the service in the Navy until a medical discharge occurred.

Born on Darden Road, he’s a son of Robert and Katie Scott, and the last of his siblings; Irene Scott, the baby of the family, was the most recent to pass away.

After receiving a pacemaker and two hip replacements, Scott relies on his walker to move about.

“I get around some — the store and church,” he said.

Thinking back on all that he’s witnessed, Scott said that one of the biggest changes has been in people.

“People were more friendly,” he said, adding he doesn’t know why they aren’t now. “I wonder that myself.”

The planned celebration will be low-key by staying at home.

“I don’t plan on going nowhere,” Scott said with a grin.