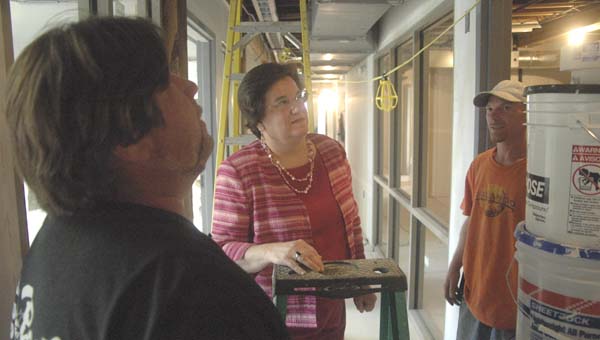 Nancy Parrish, manager of the Franklin Business Incubator, visits with two contractors working on the fourth floor build out. After some delays, construction is now expected to be completed by the end of October.

FRANKLIN—After several delays, the $700,000 construction project to build-out the Franklin Business Incubator will be completed at the end of October.

Nancy Parrish, manager of the Franklin Business Incubator, said the project was to have been completed on Sept. 6, but an audit revealed that some construction materials were not stamped as being American-made, a requirement of the federal stimulus money that is financing the build-out.

“Everything is not clearly marked. They had to do a bit of research.”

According to Parrish, all of the products in question, which included wiring and metal studs, were found to have been made in this country. But she added the American-made requirement contributed to the delay as well, since some products — like toilets — are hard to find here.

Despite the delays, Parrish said construction, led by SEVAC Corp. of Portsmouth, was going well and she was pleased with the job they were doing.

“I think they are a doing a good job,” she said. “The sub-contractors knew there was a clause (requiring American-made products), and they secured products that were made in the U.S.A. They felt they were covered. They just didn’t realize it had to be stamped on there. It was just a glitch, a technicality that had to be overcome.”

Last year, the Incubator at 601 N. Mechanic St. was awarded two grants to complete the building: a $150,000 grant from the U.S. Department of Agriculture in August, and a $536,466 grant from Community Development Block Grant–Recovery program. CDBG–R is funded by the American Recovery and Reinvestment Act and is administered by the Virginia Department of Housing and Community Development.

The project was also delayed in late 2009 and the early part of this year as local officials waited for International Paper Co. to decide where to base 35 customer service employees. In April, IP picked a location for the employees in Suffolk, and moved them there on June 1.

Parrish said one current Incubator tenant, the Professional Academy of Health Care Reimbursement Specialists, could possibly expand to the fourth floor. She said other potential clients currently in negotiations, together with PAHRS, could take 10 percent of the 10,000 square feet that will come available when the project ends.

“We are over 100 percent occupied now, because we have clients in two common areas,” Parrish said. “I’ve seen an increase in activity over the last couple of weeks, from people who are looking for office space. I’m optimistic.”

The Incubator — a former buggy factory constructed around 1907, partially renovated beginning in 2004 and opened in 2005 — currently houses 26 small businesses, which employ 120 full- and part-time employees. 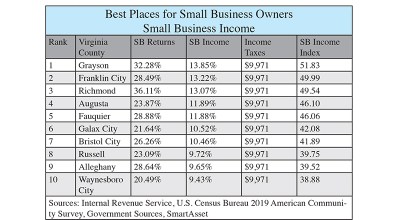