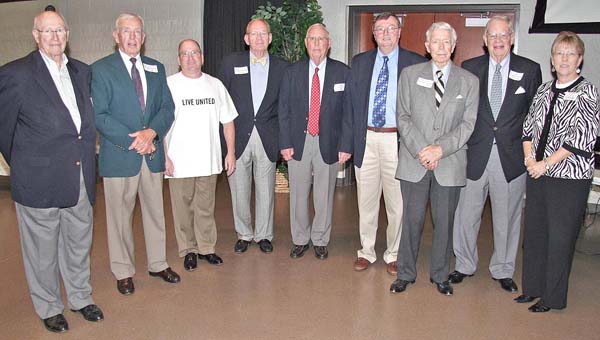 FRANKLIN—Malinda Whitehead Dawson, a single mother of two whose home was built through Habitat for Humanity, is thankful for the Franklin-Southampton Area United Way’s 70 years of service.

“We are really blessed and thankful to you all for being a partner, a volunteer and for building the community,” said Dawson, who was the guest speaker for the United Way’s anniversary dinner on Thursday at the Paul D. Camp Community College Regional Workforce Development Center.

“Without you all, I wouldn’t be able to stand here and say ‘thank you,’” she continued. “It’s a blessing to have you all. Don’t think that you’re not making a difference.”

Habitat for Humanity is among agencies that gets help from the local United Way, which has raised $4.6 million in the last 29 years, said Executive Director Anne Bryant.

“That’s amazing for a community of this size,” Bryant said. “Today we are funding 25 agencies, including the Boy Scouts, Girls Scouts and the Red Cross. Other agencies have been dropped or added as the community’s needs have changed. But what hasn’t changed is our goal of helping people have better lives.”

Franklin Mayor Jim Councill said he appreciated all that the United Way has done for the city.

“I’m not old enough to have been a benefactor for all of that,” Councill joked. “But as a little boy in Little League, all the way through adulthood, the United Way has been the backer of all of the good things that have gone on in this town. If we’ve lived here, we’ve all benefited from in it numerous ways.

“I’m looking around and I see people and organizations that have been fed by the United Way. It all adds to the quality of life here and it’s wonderful.”

“It’s a fine organization and that’s why I support it,” Cheatham said. “They do a lot for the city, and it’s not like a lot of the other (organizations). Everything we give to them goes into the city. That’s why we have supported it for many years.”