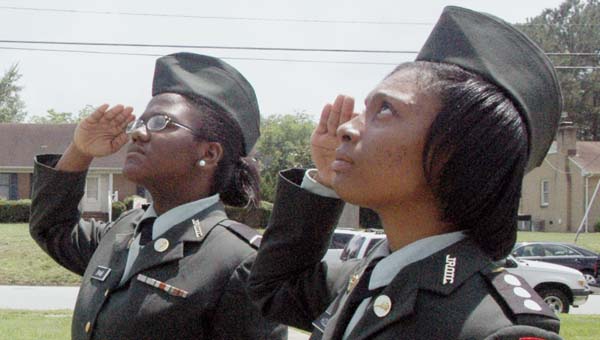 FRANKLIN—Discipline, organization and community activism are on the rise at Franklin High School these days.

So is the number of olive green uniforms.

School officials hope all of those factors will continue to increase after Franklin High officially became a host for the Junior Reserve Officers’ Training Corps on Oct. 1.

“We’re just tickled pink to have the program here,” Franklin High School Principal Rodney Berry said Friday. “Every school that I have been in has had a JROTC unit. It’s a tremendous opportunity for our students to participate in the national program.”

JROTC replaces the National Defense Cadet Corps program, or NDCC, which started at the high school in the spring semester last year with 55 students. The programs differ in the way they are funded; the federal government subsidizes most funding for JROTC, while NDCC is privately funded.

Lt. Col. Ben Hudson, a senior Army instructor who serves as instructor for the program, said there are 82 students in JROTC this term.

“Unlike the NDCC, this gets us inside the wire,” Hudson said Tuesday. “It allows us to actually play by all of the guidelines set up by the U.S. Department of Defense. It also means we have ‘Big Army’ behind us for acquiring all of our uniforms, training gear and teaching and instruction modules.”

Hudson said the federal money would also pay for half of his salary and that of a second instructor, First Sgt. Derrick Robinson. Hudson said Robinson is teaching 49 first-year, or first-tier cadets, while he has 33 second-tier kids under him.

“We lost a couple of kids from last year due to scheduling, but the ones that are second-tier students are having a good time with it,” Hudson said. “They have been introduced to all of the basic stuff. Now we have to take their knowledge up to another level in terms of marching, drilling and rifle marksmanship.”

Berry said he was pleased that the JROTC program was becoming more popular with students.

“It’s a win-win situation for everyone involved with this program,” Berry said. “It’s a win for the division because we are getting surplus materials and supplies from the national units. But it also teaches our students discipline and organization, and that’s something that our students sorely need.”

The nonprofit group Franklin-Southampton Futures Inc. was instrumental in helping bring NDCC to the school last year, and provided funding for it.

Hudson said the program puts kids in a good position to receive college scholarships. For those looking to pursue a career in the military, JROTC could help participants advance through the ranks a little quicker.

“We need to get involved in the community a little bit more, whether its policing a park or a playground in town, visiting a nursing home or reading with children,” Hudson said. “We need to become more visible in town.”

Said Berry: “We are looking forward to adding more students, to more growth. We’re very happy to have this program.”