Watch out for snakes 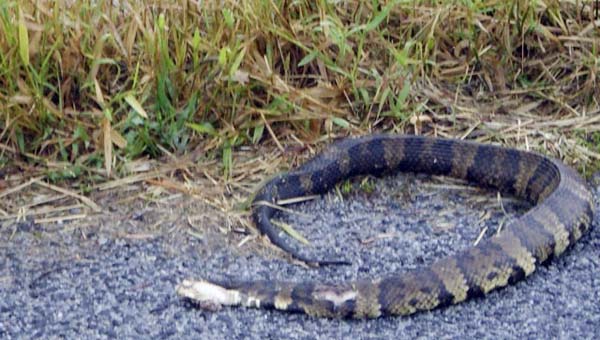 Vera Barnes took this photo of what she believes is a poisonous cottonmouth moccasin. It was dead on Statesville Road near Newsoms.

Vera S. Barnes sent a photo to The Tidewater News with a warning.

It’s a picture of a dead snake, which she thinks is a poisonous cottonmouth moccasin.

“I just would like to make the people of Southampton aware that there are cottonmouth moccasin snakes in the area,” Vera said.

She took the photo of the snake at the end of her driveway, about one-third of a mile from her home on Statesville Road, Newsoms. Vera estimates the snake, which appears to have been run over by a motorist, was 36 to 38 inches long.

Seeing the snake amazed her.

“I had my digital camera and took a photo,” Vera said.

She and a co-worker got on the Internet to research the snake; they determined it was a cottonmouth moccasin.

Vera said she saw a few similar, smaller snakes in her yard. She assumes they were young ones.

“Farmers may have seen some before in the cotton fields, and this one was found on the highway beside a cotton field,” she said. “Everyone should be very careful.”

According to the website Wikipedia, cottonmouth moccasins are found in the southeastern United States. Adults are large and capable of delivering a painful and potentially fatal bite. When antagonized they will stand their ground by coiling their bodies and displaying their fangs.

They are usually found in or near water, particularly in slow-moving and shallow lakes, streams and marshes.

* Franklin High School graduate Kay Spivey Walsh sent her own photo. A resident of Harrisonburg, she recently traveled through Sebrell and took a photo of a motorist pulled over by a police officer — appropriately, just in front of the community’s signature sign about reckless driving. It’s included in today’s column.

“I think your readers may enjoy this,” Walsh wrote.

“This will be an exciting day of celebrating native traditions and culture,” Brown said.

A representative of the Archeological Society of Virginia, Nansemond Chapter, will be at the powwow, identifying Indian artifacts.

Brown over the past “10 years” has become a familiar figure within the school system throughout Southside Virginia and Hampton Roads teaching and sharing American Indian traditions, culture and the Cheroenhaka (Nottoway) Indian Tribe’s history in full regalia.

Reflecting on Christ’s passion and resurrection

End council use of vehicles