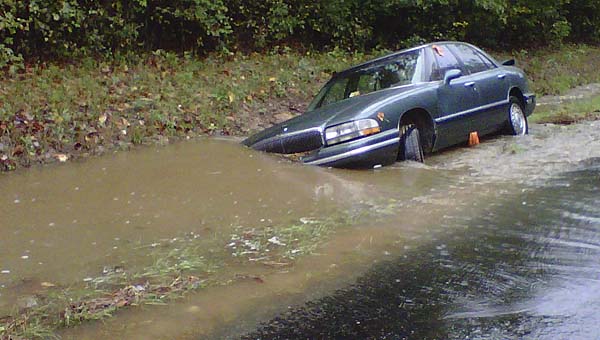 A car is partially submerged under water at Flaggy Run and Country Club roads outside Courtland on Thursday morning. -- SUBMITTED

FRANKLIN—When Billy Smith looked at his back yard Thursday, he was reminded of Hurricane Floyd, which in 1999 left his basement under 5 feet of water with $11,000 in damages.

Smith, who lives on Cardinal Avenue in Cypress Manor, was prepared for this week’s rain. After Floyd, he placed his basement furnace and freezer on bricks and bought a sump pump.

Riverkeeper Jeff Turner said the Wakefield office of the National Oceanic and Atmospheric Administration reported Thursday afternoon that 12.61 inches of rain had fallen since Monday.

“That water is upstream of us,” Turner said Thursday. “The swamps are filling in with water and it is starting to move downstream. We need it. And as long as it doesn’t flood downtown Franklin, I won’t complain about it.”

The National Weather Service in Wakefield was calling for another 2 to 3 inches of rain on Thursday night and a 20 percent chance of more precipitation today.

Jason Reddick labored through the Walmart parking lot with a shopping cart full of groceries and his 3-year-old son, Elias, in tow. But moments after getting to his car, he saw Tammy Blythe get her Plymouth Breeze stuck in the standing water on Council Drive. He ran over to help push her flooded car out.

“This is absolutely crazy,” Reddick said. “I mean, we thank God for the rain, and we have been praying for all of the farmers and we know this is what they need. But it’s just crazy out here.”

Emergency officials in Southampton and Isle of Wight counties said all roads remained open on Thursday.

“The biggest problem is on the back roads, with the exception of Route 671,” said Capt. Gene Drewery with the Southampton County Sheriff’s Office.

Virginia Route 671, also known as General Thomas Highway, was experiencing some flooding from Boykins to Newsoms and into Franklin, Drewery said. Only minor accidents had been reported in the county.

Maj. Joseph Willard with the Isle of Wight County Sheriff’s Office said deputies investigated only a few accidents, and there was minor flooding on the back roads.

“I can’t say what we will have later this afternoon when the backside of the winds come up,” Willard said Thursday morning.

In the City of Franklin, Fire Chief Vince Holt said there’s been some street flooding.

“Pretty typical for a severe thunderstorm,” Holt said. “We’ve got some ditches that are full and there’s some water crossing (streets). We’re hoping to stay in the house and stay dry. It’s a good day to find a good book and drink a cup of coffee.”

Two years of doing a better job at maintaining ditches paid off in Boykins.

“Everything is good this morning,” Town Public Works Director Jerry Hannah said Thursday. “We have minor water in the yards and a few spots on the road.”

Tarrara Creek in Boykins was starting to spill out over its banks, Hannah added.

“Usually we don’t have a problem until it gets full and then it backs up in some of the residential areas,” he said.

Part of a large tree broke off and fell between two homes on Main Street, Hannah noted.

SPM, JPK to go to virtual learning for 3 days