Heather Ann Ferguson and Matthew Harrell Ashley married at 6 p.m. Saturday, June 26, 2010, during an outside ceremony at the Historic Hope Plantation in Windsor, N.C.

The Rev. Burt Pearce of Whaleyville officiated the double-ring ceremony.

After the service, a tented dinner dance was held on the lawn overlooking the plantation grounds.

The groom is son of Mr. and Mrs. Andy Ashley of Gates, N.C. He is the grandson of Edward A. Harrell of Gates and the late Winifred Harrell and Mr. and Mrs. George Ashley.

The bride was escorted and presented in marriage by her father.

She wore a contemporary silhouette taffeta jewel neck ball gown accented by side pockets and a chapel-length train. The ruche bodice featured an empire waistline made of pleated layers of taffeta.

The bride carried a bouquet of white and blue hydrangea with green hypericum berries, and yellow roses wrapped in ivory silk and organza.

The bride’s cousin, Jessica L. Warrick of Conway, N.C., served as the maid of honor.

Bridesmaids were H. Nicole Eure of Gatesville, N.C., Leah R. Overman of Tyner, N.C., and Brittany L. Horne of Richlands, all friends of the bride.

The flower girl was Morgan C. Bass, daughter of Mr. and Mrs. Jerry Bass of Suffolk.

The groom’s father, Stephen A. Ashley, served as the best man.

Groomsmen were John E. Ashley of Gates, brother of the groom, and Travis Cowper of Gates and Joe Byrum of Morehead City, N.C., both friends of the groom.

The bride and groom were blessed to have Linda H. Baugham of Boykins, aunt of the bride, serve as mistress of ceremony.

Soloist Ginny Cowper of Eure sang “From This Moment” after the bride and groom exchanged rings. Bryan and Stuart Ferguson, brothers of the bride, served as ushers.

Dana Barrett, friend of the bride, was the program and guest book attendant.

A five-tiered lace hydrangea topped butter cream cake was made by the bride’s mother.

Donations were made by the bride and groom to the Susan G. Komen Breast Cancer Foundation in memory of the bride’s aunt, Anita F. Warrick.

A rehearsal dinner hosted by the groom’s parents was held at The Inn at Gray’s Landing in Windsor.

The guests were entertained at the ceremony and reception with music by Mike Story.

The photographer was Bob Phillips, and the videographers were Ricky Baugham and Luci Dent.

Dinner was catered by Heritage House of Windsor.

Flowers were arranged by Clay Rawls and Added Touch Florist of Ahoskie, N.C.

Hair was done by Hair by Angie of Gates.

The bride is a financial services officer with State Employees’ Credit Union in Ahoskie.

The groom is a crane operator at Nucor Steel Hertford in Cofield, N.C.

The couple took a honeymoon to the Southern Caribbean islands.

The new Mr. and Mrs. Ashley will reside in Gates.

A bridal shower was given by Reynoldson Baptist Church in Gates.

A bridal shower luncheon was held at the home of Debbie Baugham in Boykins and was hosted by the bride’s aunts, Linda Baugham, Penny Baugham, Debbie Baugham and Trudy Gunn, all of Boykins. 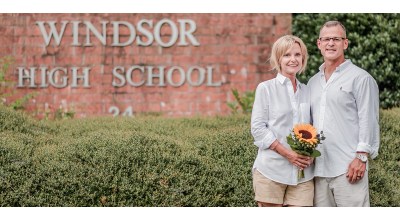