BERLIN—Rita McCormick says her mother, from whom she learned to cook, was the original Martha Stewart. 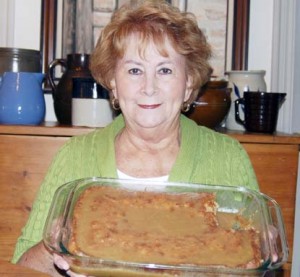 “The table had to be set correctly with cloth napkins and a colorful centerpiece at every meal,” McCormick said. “It made no difference whether we had something light or a full-course meal, the table and the food were attractive.”

Her mother put a lot of effort into every meal, and she taught her four daughters to do the same.

“She’d say to one of us, ‘Go out and pick some snapdragons, or marigolds — in the winter, it was nandina berries or ivy — for the table.

The active 65-year-old cooks the way her mother taught her, even down to the presentation of her dishes, which she often adorns with things like sprigs of parsley with lemon wedges or crab apple rings.

A native of east Tennessee, McCormick moved to Virginia in the 1960s, settling in Hampton.

“I actually came to visit, but I liked Virginia so much, I decided to stay,” McCormick said.

She eventually built a home near Berlin on Appleton Road, from which her husband, Ron Stephens, commutes daily to Chowan University, where he is a teacher.

McCormick and her husband have three children between them; she has a son and Ron has a son and a daughter, who has two children.

After her move to Berlin, McCormick quickly endeared herself to the community with her cooking. She recently made 50 of her famous crab cakes for the 50th wedding anniversary reception of two dear friends.

“I learned to cook when I was very young and I love it,” McCormick said.

“When my father died, Mama was left with five children under the age of 15 to support,” she said. “She went back to school at night to get her master’s degree and became a teacher. Of course, we all had to help. One sister and

I would clean the house one week, while the other two sisters would cook.

The next week, we’d switch positions. Our brother was the youngest, but he learned a lot about cooking too.”

“We spent a lot of time with our grandparents on their farm while Mama worked, so we are all familiar with hog killings, vegetable gardens and things like that,” McCormick continued. “Mama taught us until we were old enough to do it on our own. She cooked a lot from scratch, like our grandmother did. She could tell by sight exactly how much salt to add to something she was cooking.

Being a teacher, she also used this opportunity to teach her daughters fractions.

“One of her fellow teachers told her once that I was not doing well with fractions, so then we started measuring things,” McCormick said. “She’d ask me to add a third cup and a half cup of flour, for instance. As I got older, the lessons got harder.”

McCormick said when she and her siblings were old enough to attend school, her mother moved the family into town.

“The first thing she did was to organize the kitchen, down to the pantry, where she always had a shelf filled with things for unexpected company. You never know when someone will drop in,” she’d say.

“Our neighbors quickly found out that we all could cook,” McCormick added.

“We had one neighbor who didn’t have any children and she’d call Mama anytime and say, “I’m having my ladies church group over for a meeting tonight. Could you have one of your daughters make me a batch of cupcakes?”

FAVORITE FOOD: Any kind of dessert

WHAT IS THE FIRST THING YOU REMEMBER COOKING: Cornbread, when I was about 10

WHAT HAS BEEN YOUR WORST COOKING EXPERIENCE: I have been able to cook since I was a young girl, but I didn’t always know the cuts of meat. We were staying at my grandparents’ home once when they had just killed hogs. My mother told me to get tenderloins from the cooling room and cook them for dinner. I picked out a backbone and fried and served it to the family. It was good, but not what Mama had intended to have for dinner.

ONE INGREDIENT YOU CAN’T COOK WITHOUT AND WHY: Salt. Just a pinch brings out the flavor in most dishes.

WHAT IS THE MOST IMPORTANT THING YOU HAVE LEARNED ABOUT COOKING: My mother used to say that you have to love the people you’re cooking for in order to do a good job. I think she was right — the way you feel about your guests has a lot to do with how well you cook.

WHO IS THE BEST COOK YOU HAVE EVER KNOWN AND WHY: My mother, Jessie Thompson. She was an extraordinary woman. When my father died, she was left with five children to support, all under the age of 15. During the early years, we lived frugally, of course, but we always had good food. Mama was an expert at making a meal out of very little. And not only was the food good, it looked attractive. We called her the original Martha Stewart — it made no difference what we had to eat, we always had a centerpiece of flowers and cloth napkins.

IF YOU COULD EAT ONE THING FOR THE REST OF YOUR LIFE, WHAT WOULD IT BE: Potatoes, and I can cook them any way you suggest.

Very gently fold in crabmeat, which has been checked for shell, drained and patted dry on a paper towel. Gently form into six large or eight smaller cakes. Line shallow baking dish or cookie sheet with foil, which has been buttered or sprayed with cooking spray. Gently place crab cakes on foil and bake for 20 minutes in 350-degree oven. Dust with paprika and serve with lemon wedge and sprig of parsley.

NOTE: Can be made ahead and refrigerated until time to bake.