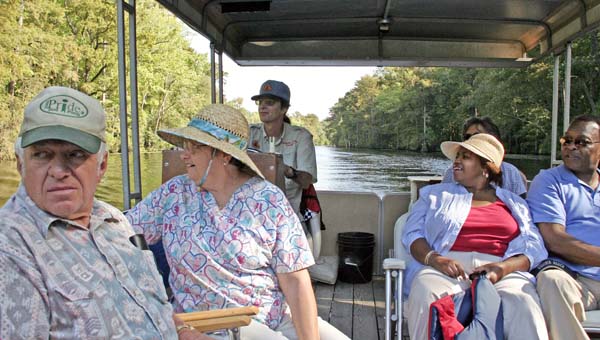 From left, Mac and Annie Sue Blythe, Riverkeeper Jeff Turner, and Dee and Horace Holley float the Blackwater River during a Sunday trip sponsored by the Southampton County Historical Society. Twenty-seven people participated in the tours of the river. -- ANNE BRYANT/SUBMITTED

COURTLAND—The Southampton County Board of Supervisors moved forward Monday on two proposals regarding the environment, one for its enjoyment and the other for its protection.

The Sebrell Hunt Club received a conditional use permit to operate an eight-trailer campground, and legislation designating about 33 miles of the Nottoway River as scenic moves on to the General Assembly.

Randall, with the Suffolk law firm Stallings and Bischoff, added that the trailers would not be rented out.

“They will not be used for any type of concert, and (the hunt club) will not be renting them out for camping during the summer,” Randall said. “These trailers will specifically be used for one purpose, and that’s for hunting, (and also) staying overnight at the hunt club during workdays, such as cleaning up paths, putting up tree stands, and things of that nature.”

The Sebrell Hunt Club has been in the community since the 1950s and currently has 40 members. The club owns 2.02 acres on Rosedale Drive, a private road, and has permission to hunt on several surrounding and nearby farms.

“They’re an asset to the county,” Bruce Phillips, who owns 300 acres near Sebrell, said. “The hunt club is kept in good fashion. It is probably one of the neatest maintained (clubs). They take care of my property.”

Meanwhile, the supervisors also passed a resolution formally asking the state legislature to include the lower Nottoway River in the state Scenic River System.

In May, the Virginia Department of Conservation and Recreation determined that approximately 33 miles of the Nottoway in Southampton County — from Cary’s Bridge Road to the North Carolina border — qualifies for inclusion in the scenic river system, which is designed to identify and protect significant river resources.

Monday’s resolution also includes specific language requested by the City of Norfolk, which operates a pump station along the river just above Courtland. The station supplies water to the city.

“Nothing in this section shall preclude the Commonwealth or a local governing body from constructing, reconstructing, operating or performing necessary maintenance on any transportation or public water supply project,” the resolution said.

Similar language was included in the legislation that designated the Blackwater River as scenic in April. Norfolk also has a pump station on that river, above Franklin.

“The city would like to avoid any potential for interference with these facilities that could arise as an unintended consequence of the designation,” Norfolk City Manager Regina Williams said in a letter dated Sept. 16 to Southampton officials. “We think this is best achieved by express language in the designation legislation.”

“I’m for it (and) it sounds good, but what effect will this have on the adjoining landowners to harvest timber and hunting?” asked Glenn Updike of Newsoms. “The local, state and federal governments have a habit of approving projects such as this, and then within a year, two years or five years, they come in and put a lot of restrictions on what the adjoining property owners can and cannot do.”

Mary Howell agreed, adding that she used to live in Oklahoma, another state that had a scenic river program. She said that, unlike the Virginia program, Oklahoma designates both sides of the river as public access.

“Farmers own that land,” Howell said. “I do think scenic rivers are a good idea, but we also need to think of the landowners and their concerns, and about any future regulation.”

Portions of the Nottoway totaling 39.5 miles were designated as historic in 1979 and 1992. The scenic section runs from Virginia Route 40 at Stony Creek in Sussex County to Cary’s Bridge Road.

The Blackwater and Nottoway combine to form the Chowan River at the North Carolina state line.

The county hired four new employees in September, accepted two resignations and had one employee retire.

Tiffany Laney was hired to the office of the Commonwealth’s Attorney at an annual salary of $46,297 on Aug. 23. Meanwhile, Thomas Barksdale, Jeremy Edsall and James Smith were hired by the Southampton County Sheriff’s Office on Sept. 1, each with an annual salary of $29,843.

George Bruch resigned from the office of the Commonwealth’s Attorney on Sept. 14, and James Bryant left the utilities department on Sept. 15.