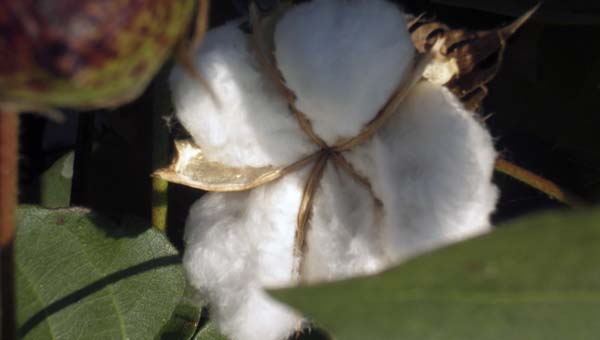 Cotton blooms along Business Route 58 between Carrsville and Franklin. The price of cotton has reached a new high, but local farmers won’t reap the benefits due to contracts set on last year’s price. -- Gwen Albers | Tidewater News

WINDSOR—The price of cotton reached a new 15-year high, driven in part by heavy demand overseas, low supplies and natural disasters — both at home and abroad.

On Monday, Cotton No. 2 futures contracts were trading on the New York Board of Trade at a rate of more than $1.06 per pound.

But many Western Tidewater farmers won’t be reaping the benefits of higher prices for cotton — yet.

According to Johnny Parker, a cotton egronomist with Commonwealth Gin in Windsor, the price of cotton was in the 70-cent range when farmers signed contracts last year for this year’s crop.

“The price has gone up to a dollar, but there’s not many farmers able to take advantage of that price because they’ve already sold (their cotton),” Parker said. “Most farmers have sold a good part of this year’s crop in the 70s. They have to estimate a yield (when they sign a contract), and most of them were conservative. That was wise this year. Sometimes you have bad years and you don’t want to over-contract.”

Mark Hodges, who owns Mid-Atlantic Gin in Emporia, said there were many factors responsible.

“The number one reason is that over the past three to four growing seasons, the acreage (devoted to cotton) has been reduced,” Hodges said Wednesday. “The worldwide supply has gotten really low.”

Hodges said increased demand was another major factor. Other media outlets have reported rising demand for cotton this year from China and Brazil.

“The economies of the Far East have taken off much greater than our own,” Hodges said. “We have skinnied the inventories down so low and let the industry pipeline get so low that the demand has outgrown the supply. Prices have gone from levels in the (60 cents per pound range) all the way to today, where cotton was trading at $1.03.”

“The flood in Pakistan took away several million bales, just annihilated some of their cotton crop,” Hodges said. “There were already low inventory levels and increasing demand, then you have a catastrophe like that.”

“Today the price is very good for next year,” he said. “That would be an opportunity for farmers. It’s extremely profitable, and certainly it’s going to attract more cotton acreage. However, there is no guarantee that even two months from now the price is going to be 80 cents. Nobody really knows what the market is going to be in 10 minutes. It can go down as fast as it goes up.”

Hodges agreed the price of cotton is unpredictable, but he believes prices will remain high into next year.

“Our production can’t hardly keep pace with the demand, if the demand were to stay at sort of the same levels,” Hodges said. “But who says that’s going to happen? Historically, when we get prices that high, it doesn’t take the world very long to fill the void. But the predictions right now say we can almost take the world production at reasonable levels, and we will come out of this next crop almost in the same situation that we are in now.

“It’s going to take some time in order for the supply situation to get balanced.”

Last week, when the cotton futures price hit $1.03 for December 2010, Hodges said the mark was “historically a high price.”

“(But) the market is still telling you that even though we might be able to bring supply back in line somewhat, it’s still going to be short enough that we’re going to be at that level next year at least. The industry knows we can’t have a whole lot of discouraging news during the whole harvest.”

Hodges said he expects farmers to plant more cotton next year to take advantage of the high demand for it, but other commodities — corn, soybeans, wheat and peanuts — could make gains in acreage as well.

“We have been booking next year’s (cotton) crop already,” Hodges said. “Yes, (cotton) will prove to be more attractive, but corn and grain prices have risen as well. If you get high prices in these commodities, they will compete for the acreage.

He added that competition for acreage would be good because “it will help keep the market firm. In order to get the cotton planted, you need the demand and it has to work in relative economic terms against the other crops. High prices breed high prices.”