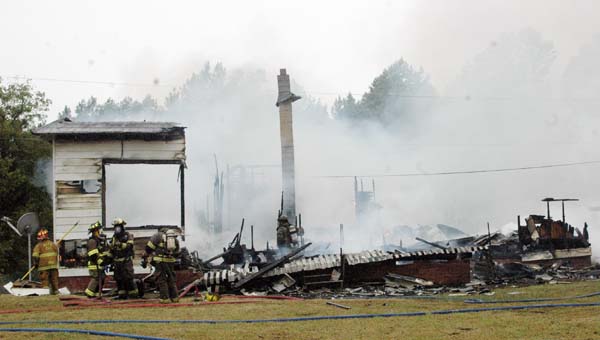 Firefighters work to extinguish a blaze that destroyed this home in the 30000 block of The Hall Road in Branchville. -- Nicholas Langhorne | Tidewater News

Just before 11:30 a.m., authorities received a call for a “house fully involved and almost on the ground” in the 30000 block of The Hall Road near Davis Lane.

“It was fully engulfed when we got there,” said Fire Chief Justin Overby of the Branchville Volunteer Fire Department. Firefighters from Boykins, Newsoms, Capron and Drewryville assisted Branchville, he said.

The fire was extinguished at 3:06 p.m. Overby said Monday afternoon the cause of the fire is undetermined. Sgt. Wanda Covington of the Southampton County Sheriff’s Office said the department’s arson investigator had been to the scene and foul play didn’t appear to be involved.

The Red Cross is assisting the resident, who wasn’t home when flames broke out. Officials were not sure whether the home was insured.

Southampton board to consider support of Sussex ‘mega-site’