ZUNI—The new preacher at Tucker Swamp Baptist Church didn’t have to move far for his new job. He just stepped up to the pulpit. 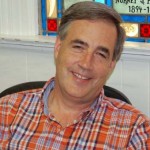 The Rev. Bill Dawson had been the associate pastor at Tucker Swamp for five years when the senior pastor left. Dawson accepted immediately when asked to fill the top position.

“I love this church and I love the people here,” Dawson said of the 800-member congregation. “I was very happy to have been considered when the senior pastor position became available.”

This is his first time as a senior pastor.

A graduate of North Carolina Wesleyan College and Liberty Theological Seminary in Lynchburg, Dawson moved his family to Sedley when he came to Tucker Swamp. He and his wife Donna, are the parents of Brandon, 29, Lauren, 25, and William, 16. They have a grandson, Peyton.

“We are currently short one full-time and one half-time position and we’re looking at filling these in the near future, “ Dawson said.

The 54-year-old remembers when God called him into the ministry, he said.

“I was teaching band and chorus in the local school and working part-time at a nearby church when it happened,” he said. “ This was in April of 1980. I quit my job and went directly into church work. Later, I enrolled in seminary.”

He came to Tucker Swamp as associate pastor and minister of education — inheriting the music position later — after 15 years as minister of youth at Amherst Baptist Church in Amherst.

The new preacher says he is excited about the future of Tucker Swamp.

Another mission, he says, is to develop a vibrant youth and children’s ministry.

The church has a foreign ministry where members have been to Peru, Africa, Mississippi and Bland County. Currently members are serving in Kenya and Napol.

But right now, the church is participating in one of its home missions — its Community Impact Day, where church members go out into the community and do home repairs for those who are in need.

“We have members in church who are carpenters, roofers, plumbers, to name a few, who take a day to help these people. We’ll pick several homes and divide the workers into groups for the individual homes. For instance, if a home needs a new roof, we’ll send roofers; if a home needs a handicap ramp, we’ll send carpenters and so on,” Dawson said.

Dawson says the church has been doing this for a while. He added that the next Community Impact Day is set for Saturday, Sept. 25.