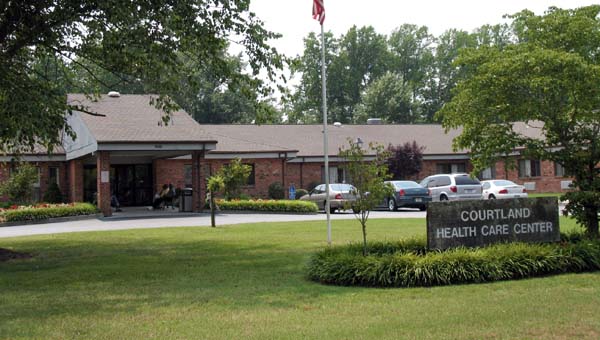 COURTLAND—Juanita Sydnor has been a volunteer at Courtland Health Care Center for more than 15 years.

She estimates she has spent about 330 days at the nursing home in the last year, logging about 775 hours while

visiting with residents and sharing friendships with them and their families.

She also figures she has spent between $3,000 and $4,000 of her own money on decorations to bring cheer to the place year-round.

“Everywhere I went, I was always thinking about those residents,” Sydnor said Friday. “I would always buy stuff that I knew they would enjoy, and I knew they did. Everybody was looking forward to what I was going to put up next.”

“My feelings were hurt about different things,” Sydnor said. “They told me I couldn’t decorate for this and that anymore. And I said, ‘I’m not a paid employee. If you’re going to tell me what to do, it’s time for me to get out. You do what you want to do.’ I got tired of it.”

The decorations are now boxed up in her Boykins home.

A few miles away, Kenneth Williams Sr., the pastor of Fountain Grove Baptist Church near Emporia, also laments the changes that have taken place at the nursing home.

“Courtland is like a stirred-up hornets’ nest,” Williams said Wednesday. “People are very upset. (Courtland Health Care Center) has had a good name. I’ve been a minister for 40 years and I’ve visited it for a little while. That was my favorite.”

Both Williams and Sydnor claim problems at the nursing home began in February, when Medical Facilities of America Inc., the for-profit company in Roanoke that operates the nursing home at 23020 Main St., brought in a new administrator, Mandy Pennington.

Williams alleges that since Pennington arrived, the director of nursing at the facility and 25 nurses — some with 16 years of service — have been fired.

“She was empowered to make these changes,” Williams said of Pennington. “This woman cleaned house. I don’t like to judge people, but preachers get upset too and this has upset me tremendously.”

Pennington declined to be interviewed, but did agree to answer written questions about the alleged firings. She disputed that 25 nurses had been let go.

“I cannot comment on individual situations,” Pennington wrote on Friday. “While we acknowledge there have been some staff terminations, your information about the numbers of nurses being fired is exaggerated and inaccurate. Our staffing levels have remained consistent over the last few years, and we do not use temporary workers.

“Courtland Health and Rehab is a long-standing employer in this community, and our staff will continue to provide the high quality care to our patients that we are known for.”

“People are not dumb,” Sydnor said. “They know that something is going on. And we were not allowed to talk about anything. I would try to do my one-on-ones, and the residents would ask ‘where is so-and-so?’ And I was told to say, ‘I don’t know where so-and-so is.’”

Sydnor said she also took issue with people who disagree with her quitting.

“There have been so many changes. I just don’t need that no more. If they hadn’t talked to me (about the decorations), I would still be right there today.”

“Thank God she was sitting outside,” Sydnor said. “I just sat outside and talked to her. I haven’t been back into the building. I want to go back because I have met all of these people and I know every one of them by heart.”