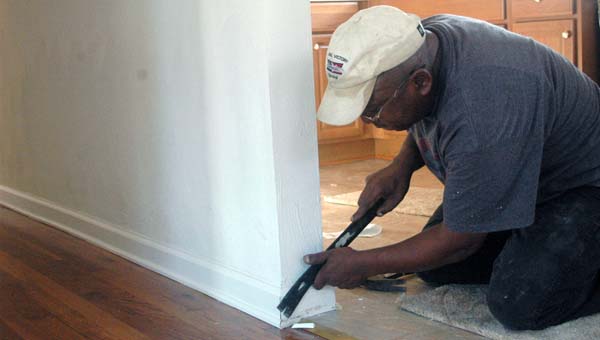 Wilbert Williams Jr., of Wilbert Williams and Sons Building Contractors Inc. in Courtland, puts the finishing touches on the home at 212 Thomas St. The house, built in the 1970s, has been completely renovated. -- Nicholas Langhorne | Tidewater News

FRANKLIN—Last year, the city was awarded a $400,000 grant to purchase, rehabilitate and resell vacant foreclosed homes to low- to moderate-income families.

Now Franklin is preparing to sell the three properties it acquired through the Neighborhood Stabilization Program. The homes are at 212 Thomas St., 808 Walnut St. and 135 Langston St. Sale prices will be based on the buyer’s income.

Work on the other two homes should be completed in 60 days.

“What we’re going to do is resell these with some discounts to eligible homebuyers,” Goodwin said. “As long as their income doesn’t exceed 120 percent of the median income, then they’re eligible to purchase these homes.”

In addition to meeting income and credit requirements, potential homebuyers must participate in an eight-hour homeownership course.

The City Council will hold a public hearing at 7 p.m. Monday, Sept. 27, at City Hall to hear public comment about the sales.

“This is just a normal step,” said Goodwin, adding that state law requires a public hearing before the city can sell or dispose of publicly owned real property.

City Council will also hold a public hearing on Monday for the sale of a piece of city-owned property in the Cypress Manor subdivision off Country Club Road. City Attorney Taylor Williams said the property houses a deep well that used to serve Cypress Manor. Water lines have since been extended to the subdivision from the city limits, and the well has been abandoned and capped with concrete.

“So we don’t need that corner lot anymore,” Williams said.

Franklin, Southampton public schools to close Friday due to snow