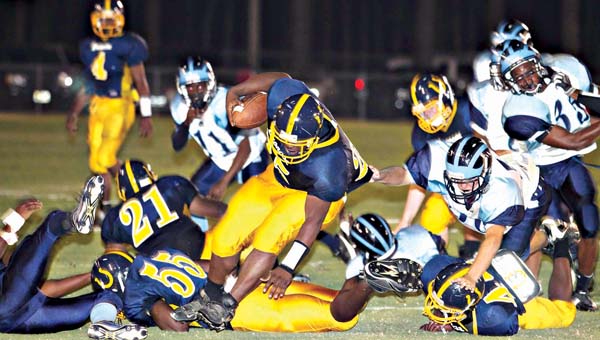 Middlesex defenders get his jersey but little else as Franklin High’s Lavon Evans powers for yardage in the third quarter Friday night at Armory Stadium. -- Frank Davis | Tidewater News

The Broncos sprinted to a 22-0 lead after one quarter, led 28-0 at halftime and never looked back.

“Great job,” FHS coach Darren Parker told his team after the Broncos improved to 4-0 on the season.

Parker’s only concern was the Chargers’ lone touchdown, scored against Franklin’s defensive reserves midway through the fourth quarter.

“No matter who is in the game, the level of play does not drop just because we are ahead,” he said.

The Franklin defense held the Chargers to 164 yards on the ground and nothing in the air. Jalen Boone led the charge defensively with 6 tackles.

After returning the opening kickoff to the Charger 45-yard line, the Broncos moved the chains twice before Martinez Hill pushed it over the goal line on a 1-yard run. The point-after kick by Antone Bland was blocked, but the Broncos led 6-0 with 10:08 left in the first quarter.

After the Bronco defense held the visitors on their first possession, FHS’ Justin Grant nearly broke it all the way on the punt return but was stopped at the Chargers’ 6. From there, with 7:20 left on the clock, Lavon Evans ran 3 yards for the TD. Mitchell scored on the two-point conversion to put the Broncos up 14–0.

After a 21-yard pass from Kigler to Shaquan Cook on Franklin’s next possession, Mitchell rushed for a touchdown and made the two-point conversion to make it 22-0 with 48 seconds left in the opening quarter.

Kigler recovered his own fumble in the end zone for the Broncos’ only touchdown of the second quarter.

In the third quarter, the Broncos added two more scores — a 22-yard run by Mitchell and a 41-yard power run by Evans. With the score 42-0, the referees elected to run the clock.

Middlesex’s only score was an 8-yard run by Jeremy Rich with 7:53 remaining. The extra point was good.

Dunn capped Franklin’s scoring with a 19-yard run in the final minute of the game.