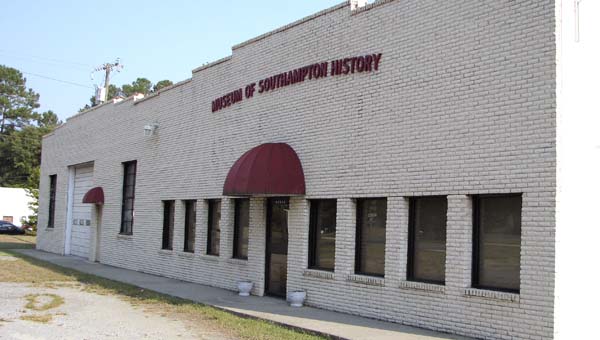 The Museum of Southampton County on Main Street in Courtland will soon be renovated. -- Charlie Passut | Tidewater News

COURTLAND—Plans to develop the Museum of Southampton History in the former Blount building on Main Street are moving forward.

Lynda Updike, president of Southampton County Historical Society, said the museum exhibits would begin with the formation of the county in 1749.

“We have a chronological outline of what we want to include in the museum,” Updike said Wednesday. “That outline is partly based on what artifacts we have for the museum, what we think we can get and what artifacts might be available.”

She added that the cut-off date covered by the museum “will probably be 1950, although we have talked about including the formation of Southampton High School. We’ll also tell the story of Franklin becoming a city as well.”

Updike said the historical society was working with historian, preservationist and author John Quarstein on development of the museum, which she said is in a building once built to house a car dealership.

“What the plan calls for is to gut that building,” Updike said. “Most of the walls are not weight bearing, which means we can take them out and have portable walls go up about 8 feet. We will be able to display artifacts on the walls and in cases.”

The current plans also call for the back of the museum building to become the front and vice versa. A new façade would be built on what will become the rear of the building facing Main Street.

Updike said there was no timetable for when any construction or demolition work would begin at the museum. The historical society was also still needs to secure funding for the museum project.

“We’re trying to get everything planned out before we start doing anything else,” she said. 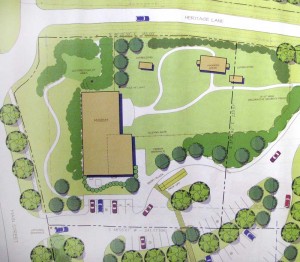 This is a preliminary design for the campus of the Museum of Southampton History. -- Traub Architecture and Design

In July, the Virginia Department of Transportation awarded the historical society, through the county, $420,000 in federal funds to help develop a driving tour of the Southampton Insurrection of 1831, which was led by Nat Turner. The society, historians and local officials envision the history museum and a restored Rebecca Vaughan House next door serving as the starting point for both the driving tour and a walking tour of historic buildings in Courtland.

Updike said the history museum would not be the same as the Southampton Agriculture & Forestry Museum, which is across Heritage Drive.

“They will build on each other,” she said. “What is in the Agriculture & Forestry Museum will not be repeated and won’t be moved to the (history museum). It will be a whole campus of museums, and the Rebecca Vaughan House is in that campus as well.”

Updike added that an exhibit providing an overview of slavery and slave life in Southampton County would be at the county museum. Meanwhile, the Rebecca Vaughan House would be used to tell the story of Nat Turner’s revolt.

Updike said the historical society hopes to work on the interior of the Rebecca Vaughan House in the near future. She said Joanne Fox of Capron and Gail Camp of Sebrell are co-chairs of the History Museum Committee.

“If you have any furniture you would like to donate, or know anyone that does, we need pieces (and accessories such as candlesticks, maps, bedroom toiletry items, etc.) that would be no later than 1830 for a parlor, hall and bedroom,” Fox and Camp wrote in the September issue of the historical society’s newsletter. “We are also seeking exhibit items for (the history museum), items dating (the) county’s earliest days in the mid-1700s to the 1950s.”