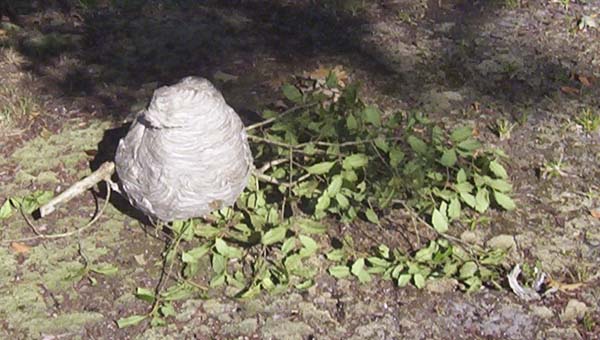 Woodrow “Woody” Wilson stopped by The Tidewater News Monday to share photos of a basketball-size hornets’ nest in his Courtland yard that took the stinging insects about one week to build.

It was the biggest hornets’ nest Woody had seen in his 82 years.

“Ants aren’t the only hard workers,” he said. “They (hornets) need water and they gotta make up a paste. Water is scarce.”

Concerned about having the stinging insects so close to his home, Woody used a hornet spray bomb to kill them. Twenty-four hours later, he was able to remove the nest from the holly tree.

“It was woven in the limbs,” he said.

She taught in Southampton County before moving to Suffolk Public Schools, where she retired after 39 years. Madelaine then worked for Suffolk Parks and Recreation, retiring after 12 years of service.

• Lee Bowden had a successful Isle of Wight County Fair. Lee racked up several ribbons from his chickens to his scarecrow and photography.

• Sallie Christine Jarrett of Boykins stopped by The Tidewater News to share some news about her great-nephew, SSG Darion Flythe. A 2001 graduate of Warwick High School, Flythe has been to Iraq twice and recently returned from Afghanistan. He is stationed in Germany.

Darion, 27, and his wife, Allycia, are the parents of Darion Jr., Deanna and Danielle.

• Virginia Farm Bureau has awarded a $1,000 U.S. Savings Bond to Bruce Alphin of Isle of Wight County for completing the Teenage Driver Safety Education Program. Bruce is a second-year student at the University of Virginia, where he is studying biology.

TDSEP is designed to help protect the lives of Virginia teens by rewarding safe, responsible drivers.

The window is there to return to bipartisan compromise in 2022

A legal nod for McLemore