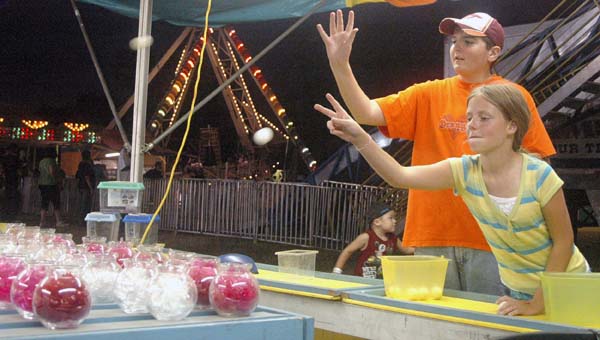 Adam Beard, 14, of Courtland and 11-year-old Nicole Copeland of Franklin toss Ping-Pong balls to try to win prizes on the midway of the Isle of Wight County Fair on Friday. -- Charlie Passut | Tidewater News

“We had significant growth,” Furlo said. “I think people have started to see the improvements we made to the fairgrounds, and I think we continue to improve on the type of entertainers, ground acts and competitions.”

“The weather was perfect,” Keyt said. “To be honest, it’s our goal to improve this event every year. It’s going to be tough to repeat this weather pattern, but I am optimistic for next year and I love to break records.”

This year’s fair featured country music shows by national acts, including The Band Perry, which earlier this month was nominated for Vocal Group of the Year for the 44th Annual CMA Awards; Jason Michael Carroll, whose first album debuted at No. 1 on Billboard’s Top Country Albums chart and included top singles, “Alyssa Lies” and “Livin’ Our Love Song; and The Kentucky Headhunters, who have sold more than 6 million records over the last 17 years.

Thursday’s fair attendance increased this year thanks to the Carload Night promotion, Furlo said. Up to 12 people in a vehicle got in for a total of $30; the promotion included passes for everyone for unlimited rides. Other days, it costs $5 to get in and $15 for unlimited rides if wristbands are purchased in advance and $20 at the gate.

“That turned out to be pretty successful,” Furlo said. “It was a pretty good deal, especially for churches. If you had a youth group, and you have a 12-passenger van, that works out to be a few bucks a person.”

Keyt commended the community for the fair’s success.

“Local businesses supported the event by sponsoring, purchasing commercial space, purchasing ads and donating in-kind services and items that were needed,” she said. “Residents of Isle of Wight supported the event by attending it, and in some cases, some folks came out every day. Local civic and nonprofit groups served the fair in crucial areas and their customer service on the grounds was outstanding.”