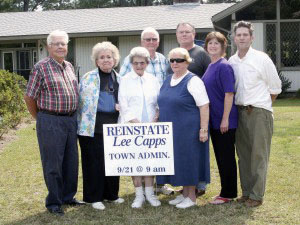 Messages urging Murfreesboro Town Council to reinstate Capps are popping up all over town.

On Sept. 9, the Town Council voted unanimously to dismiss Capps who began, work with working for the town in June. The decision was based on Capps’ apparent failure to perform administrative duties in a timely and efficient manner and failure to inform Council of projects being worked on.

One sign in support of Capps, which owned by a business on Main Street, is perhaps the most predominate.

The large marquee sign that sits in front of Raye’s Detail Shop has become synonymous with displaying the names of individuals who do not pay for services rendered. This week, however, Eddie Holley, owner Raye Holley’s husband, agreed to allow citizens to use it in their crusade to get Council to reinstate Capps.

Holley, who serves on the Murfreesboro Planning Board, believes council members should have handled the situation a different way.

“I do think firing him was wrong; there was a proper way of doing it,” said Holley.

As a businessman, Holley said Capps should have had a probation period and a chance to correct any issues. He added town administrator is a position that takes time to get settled into.

“My opinion is that they should give him a second chance,” he said.

On Friday, a campaign by a group of Capps’ supporters began placing signs around town.

One sign went up in Hugh Vincent’s yard with his permission.

“I don’t have any personal agenda against anyone on the town council; I object to the way it was handled,” he said.

Vincent said he is a former businessman and employees should be given a set of guidelines to follow as well as a 90-day probation period.

“My concern is this will hurt the town and the (Chowan) university how it was handled,” he said.