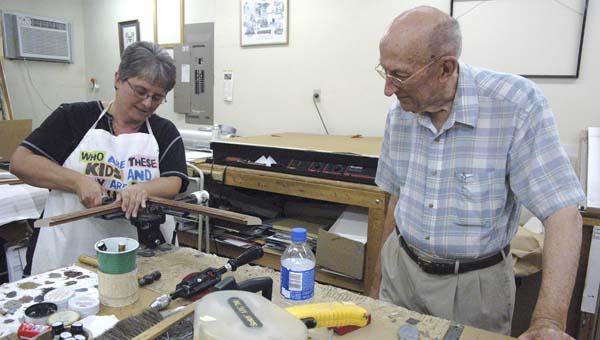 Louis Hollowell, owner of Hollowell’s Art Studio in Walters, watches Denise Perkins assemble a picture frame in the store’s workshop on Tuesday. Hollowell plans to close his business at the end of the month. -- Charlie Passut | Tidewater News

WALTERS—The walls of Hollowell’s Art Studio are covered with frames.

Paintings of sunsets, winding rivers and bald eagles share space with photos of little boys playing baseball and hunting from tree stands. A painting of an old man working on a boat looks out at another of a wine bottle and glasses. Photos of great-grandchildren hang next to an encased sample of Spanish moss.

Each frame is like a portal into the life of 78-year-old Louis Hollowell, the store’s owner and namesake, who got involved in the frame shop business 21 years ago because he enjoyed painting and was interested in how his work could get framed.

But Hollowell said he plans to close his frame shop at 28493 Walters Highway at the end of September because of slow business and health issues. He added that he had not yet decided whether to sell the frame shop’s inventory and machinery.

“This is a bad time for frame shops,” Hollowell said Tuesday. “The people here have been very good to my business; we have done very well for most of these 21 years. But food and clothing expenses are going to come before hanging a picture on the wall.”

Denise Perkins, whom Hollowell affectionately calls a “walking encyclopedia,” has worked at the frame shop for three years and is the store’s only employee. She doesn’t have another job, but said she appreciated all that Hollowell had done for her.

“He did a great job teaching me,” Perkins said. “He’s a really nice man. He is also an interesting man that has lived a long, good life.”

Perkins will miss the variety of work orders.

“You never knew what was going to come in the door,” she said.

Rosa Hollowell agreed with Perkins’ assessment of her husband and his business.

“You would not believe some of the things he has framed,” Rosa said. “He has done a tremendous business out here. He has always liked to stay busy. I don’t know how he’s going to handle this retirement.”