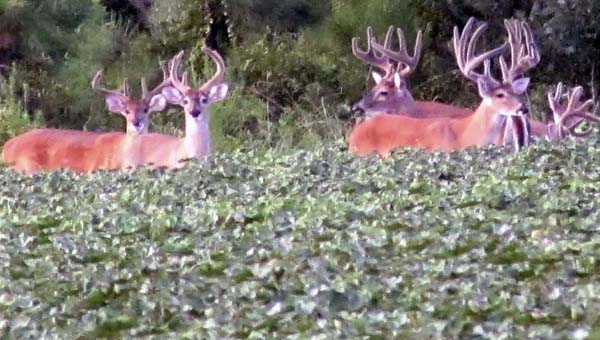 Five of the seven whitetail bucks gather on the edge of a field in Isle of Wight County. -- Submitted

SOMEWHERE IN ISLE OF WIGHT COUNTY—Laura Joscelyn captured the image of a lifetime with her new camera — a dozen big bucks in the velvet. Most of them had trophy-size racks.

For two weeks in August, like clockwork each evening, the deer showed behind her Isle of Wight County home. Joscelyn didn’t want to be anymore specific about the location.

“At the back of our house we have French doors,” she said. “We were sitting there, and out in our back field is 12 acres. Out of the corner of my eye, I looked and said ‘look what’s coming out of the woods.’ There were a dozen deer.”

She didn’t realize that so many bucks would congregate together.

“They may be together now, but pretty soon, they will have love on their minds and they will start fighting over territory,” Rush said.

Seeing a large group of big bucks together isn’t that uncommon for August.

“It’s just a big bachelor group,” he said. “They have good food and food resources to develop nice racks.”

Once the rut moves in and hunters hit the woods with dogs, the deer will separate.

“They feed in the same area every day until something disrupts them,” Rush said.

Joscelyn said she last saw the deer on Aug. 21.

“I feel very blessed,” she said. “We moved from Virginia Beach. It’s the best move we ever made in our lives. In the city, you’ve got people, traffic, kids and neighbors who complain. Here, we have wild deer in the backyard, wild turkey in the front yard and no neighbors.”