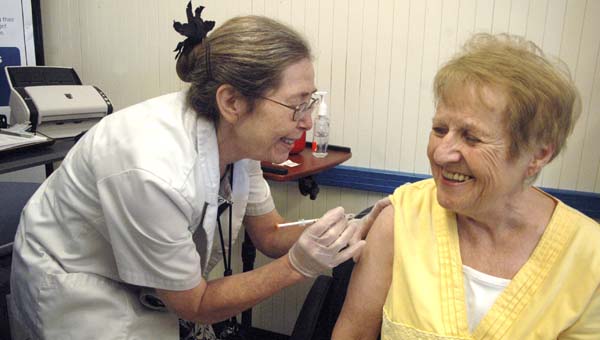 Sharon Hasty, left, pharmacy manager for the Franklin Walgreens, prepares to administer a flu shot to Rita Earls of Franklin at the store on Friday. -- Charlie Passut | Tidewater News

FRANKLIN—It’s that time of the year again — flu season.

Several local pharmacies are offering a vaccine to help protect people during the flu season, which typically begins every year in late summer and ends in the spring.

According to the Centers for Disease Control and Prevention (CDC), this year’s flu vaccine will contain three viral strains: influenza A H3N2, influenza B and the 2009 version of H1N1.

Ken Sanders, a pharmacist at the Franklin Rite Aid, said several groups of people should get a flu vaccine.

“Children, anyone involved with the schools, and anybody in the health care industry (should get vaccinated),” Sanders said Friday. “Basically, anybody that is around a bunch of kids. Also, people who are prone to lung infections, upper respiratory infections, allergy conditions and things of that nature (should get the shot).”

The CDC recommends that everyone six months of age or older get vaccinated as soon as the vaccine becomes available locally. Those at high risk for flu include young children, pregnant women, people with chronic health conditions and those 65 years and older.

“It’s still early in the flu season, but we’re trying to get the word out that you can’t be too early for your flu shot,” Mike Zajac, store manager for the Franklin Walgreens, said Friday. “One of the big things with health care right now is preventive care. This goes hand-in-hand with it.”

Walgreens pharmacy manager Sharon Hasty said the store gave its first flu shot of the season back in mid-August. Since then, she estimates more than 100 doses have been administered.

“We’ll be giving the vaccine every day, all day, until the flu season is over or we run out of flu vaccine, which shouldn’t be anytime soon,” Hasty said. “We’ve got plenty.”

Hasty added that all of the pharmacy staff at Walgreens were immunizers, which means they have received training and were certified to administer vaccinations to customers. The American Pharmacists Association says more than 100,000 pharmacists nationwide are now certified as immunizers.

“People can call us in advance if they want to, but it’s not required,” Hasty said. “The nice thing about getting the shot here is that you don’t have to wait for a clinic on a certain day, which may or may not be convenient for you. We try to do it at your convenience.”

Rita Earls of Franklin came into Walgreens for a flu shot on Friday.

“I get one every year,” Earls said. “I do it to maintain my health and keep from getting sick. Years ago, my husband and I both got sick at the same time and that was not a good thing. We always got flu shots after that.”

Hasty said Medicare Parts A and B cover the cost of the flu vaccine, which is $29.99 at Walgreens. Zajac added, “We’ll bill any insurance. Some insurance plans are paying for it at their normal co-pay or for free.”

Other locations in Franklin that are giving flu shots include the pharmacies at Farm Fresh and Wal-Mart.