FRANKLIN—Councilman Greg McLemore’s delinquent tax bill does not create a conflict of interest when he advocates for lower penalties and interest on late taxes, according to Virginia Attorney General Ken Cuccinelli. 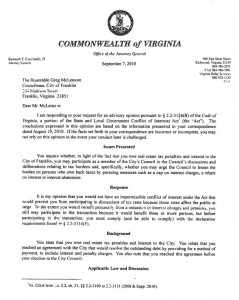 Last month, McLemore contacted the attorney general’s office for an advisory opinion on whether his delinquent real estate tax bill presents a conflict of interest. As of Sept. 3, McLemore owed the city $1,581 in delinquent taxes, but he is on a payment plan. During the Aug. 9 council meeting, McLemore removed himself from discussions regarding the delinquent tax list.

Council members did not take any action during a public meeting to prohibit McLemore from participating in discussions.

In a letter dated Sept. 7, Cuccinelli wrote, “It is my opinion that you would not have an impermissible conflict of interest under the act that would prevent you from participating in discussions of tax rates because those rates also affect the public at large.”

McLemore said the city attorney gave him “faulty advice” regarding the matter.

“In my opinion, there was not a conflict of interest because I made an agreement with the city prior to ever taking office,” he said.

“That’s (Cuccinelli’s) interpretation. It’s an opinion. Two attorneys can read the same law and get different opinions,” Burgess said. “We’ll just have to wait and see how it shakes out. Whatever it is, it is. If he can talk, he can talk.”

Although McLemore would benefit personally from a reduction in penalties and interest, Cuccinelli wrote that he could still participate in those discussions because more than three people would be affected—as long as McLemore declares his personal interest in the transaction.