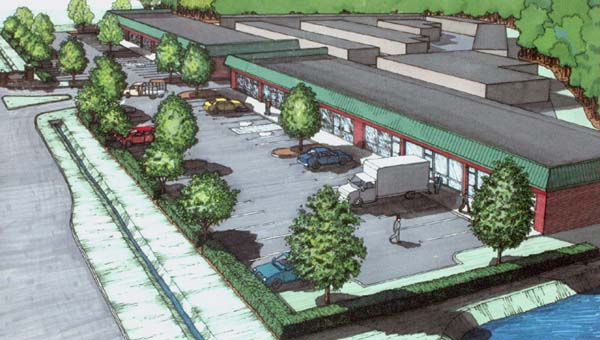 This is an artist’s rendering of the buildings under construction along U.S. Route 58 just west of Storys Station Road in Southampton County.

COURTLAND—Workers have begun excavating for the first phase of a project to build a strip mall and storage facilities along U.S. Route 58 near Courtland.

The site is north of 58 , just west of Storys Station Road and across the highway from the Courtland Food Lion.

“It’s going to be built in phases,” Dane Scott, a Realtor with Scott & Associates Inc. in Franklin, said Tuesday. “The front area will be office space or retail space, and the property behind it will be for warehouse storage and mini-storage.”

Scott said the first phase of the project, currently under way, is for the storage buildings at the rear of the property.

Beth Lewis, planning commission secretary for Southampton County, said the parcel for the strip mall and storage buildings totals 5.77 acres, and is owned by a company called Southampton Real Estate, which has a Courtland mailing address.

“They have had an approved site plan for awhile,” Lewis said Tuesday. “It’s taken them a long time to get to this point. The administrative process was completed a couple years ago. I guess they’ve just been waiting until the economy got a little better.”

Lewis added that although the site plan calls for a strip mall, tenants there probably wouldn’t be too large.

“It won’t have an anchor like a Food Lion,” she said. “Maybe someday it will have something like a UPS Store or a Chinese restaurant. But they are approved to build all of the buildings there.”