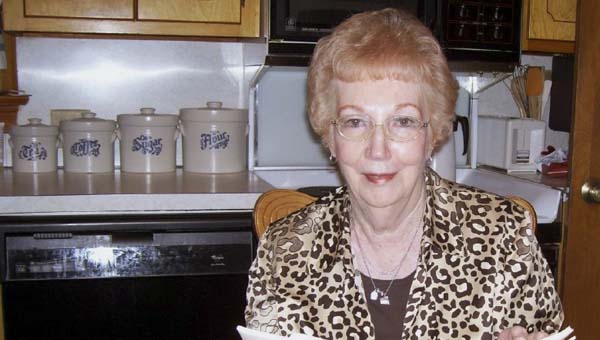 WINDSOR—Follow Joyce Neighbours around for a day, and you’ll wonder how she has time to cook.

The 73-year-old, who owns and works five days a week at her insurance agency in Windsor, has played the organ at Tucker Swamp Baptist Church near Zuni for 60 years. Neighbours also has served on boards and committees of numerous clubs and organizations for the 50 years she has lived in Windsor.

Neighbours was president of her Sunday School class at Tucker Swamp for 30 years. She also served as historian and wrote the history of the church.

Her husband, Marion, worked for the Postal Service.

Neighbours 25 years ago also volunteered to organize a 1950s reunion for her high school, Windsor High, and has done that every five years since.

Yet the active grandmother cooks dinner for her husband, as well as her two children and granddaughter, if they happen to be there, every night.

How does she do it?

For instance, Neighbours will prepare her Sunday lunch and cook it while she is at church.

“Just last Sunday, I had baked chicken,” she said. “I put it in the oven when I left before church, and when we got home, lunch was all ready.

Organization has helped in many instances, she said. Had she not been able to do that, she could never have hosted 17 Neighbours reunions for which she did all the cooking.

The oldest of three daughters, Neighbours learned to cook for the most part from her mother when she was as young as 8.

“I’d stay by her side in the kitchen and watch,” Neighbours said. “Then she’d let me cook while she supervised.”

“Mama did use recipes, but she also cooked from scratch,” she continued. “So when she knew that I was planning to get married, she started measuring and recording the amount of each ingredient in each dish and gave the recipe to me. That was a big help. Although mama wasn’t around to supervise, she still was there.”

Neighbours uses cookbooks more than her mother did.

“Actually, I like cookbooks,” she said. “I just like to read them. I probably have as many as 75 that I’ve collected over the years.”

A devout Christian, Neighbours is thankful that she can participate in different organizations. She likes what she does and has no plans to retire.

“I scramble all the time,” Neighbours said with a smile. “But I wouldn’t know what to do with myself, if I didn’t have something going on.

What is the first thing you remember cooking: Biscuits. I was about 8 and my mother supervised, of course, but I could do it by myself.

What has been your worst cooking experience: I was hosting my husband’s family reunion and was cooking a ham in the oven. The ham was supposed to be done at midnight, but I forgot about it and went to bed. The next morning I awakened at 6 a.m. to the aroma of cooked ham — it had cooked so much that it had fallen off the bone. It was not a total lost because I was able to have it ground and used it in ham salad, but it was most embarrassing to me.

What is one ingredient you can’t cook without and why: Salt. It gives foods a better flavor.

What is the most important thing you have learned about cooking: Be sure you have everything on hand before you start cooking. Also, if you’re cooking something that has to be thawed, give yourself enough time to do so.

Who is the best cook you have ever known and why: I have two, my mom, Eunice Umphlette, and my husband’s mom, Bessie Neighbours. Both ladies were excellent cooks, and I learned from both. I started helping my mother, who cooked from scratch, in the kitchen, when I was about 8. She wanted my two sisters and me to know how to cook when we left home. I thought I was a pretty good cook when I got married, but I could not make gravy. This I learned from my husband’s mother, who also cooked from scratch.

If you could eat one thing for the rest of your life, what would it be: Fried chicken.

1 tsp each vanilla and lemon extract

Directions: Cream butter, shortening and sugar until very light and fluffy. Then add eggs, one at a time until very creamy. Blend in flour, baking powder and salt mixture alternately with milk, beating well after each addition. Blend in flavorings. Pour into greased and floured 10-inch tube pan. Bake in preheated 350-degree oven for one hour. Turn off heat and allow cake to remain in oven for 15 minutes or start cake in cold oven, set temperature at 300 degrees and bake 1 hour and 40 minutes. Cake is done when tester comes out clean.

Cool 10-15 minutes in pan on cake rack; then remove cake from pan and finish cooling on rack.

Delicious as is, or may be dusted with confectioner’s sugar or frosted with seven-minute icing.