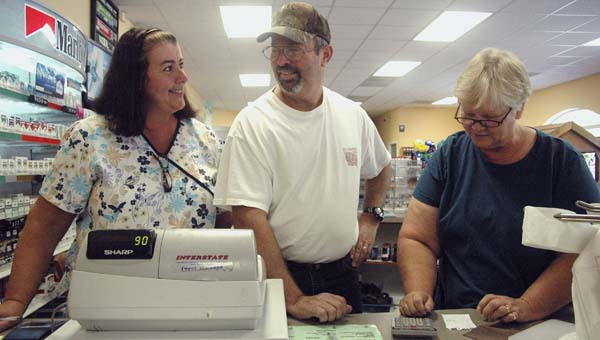 (From left) Debbie and Kenneth Barnes work behind the register of Bill’s Hometown Grill in Courtland with Janet Brooks on Tuesday morning. The Barneses are in the process of purchasing the business. -- Charlie Passut | Tidewater News

COURTLAND—Debbie and Ken Barnes are making their dreams a reality.

And they plan to keep it country.

Until recently, the Barneses ran Shaky’s Butcher Shop, a meat and seafood shop on Southampton Parkway. Debbie Barnes said Tuesday that the economy, coupled with the closing of the International Paper Co. mill and Southampton Correctional Center, forced them to close their seven-year-old business.

“We had done really well,” she said. “It was the first time we had ever been in business. We had done a lot of bulk stuff. But the economy got bad. When IP and the prison farm closed, that really hurt us a lot. Farm Fresh opening also hurt us. We were just little anyway.”

“We’re in the process of purchasing it,” Debbie Barnes said, adding there is no time frame for finalizing the sale with Flowers. “We’ve got our own thing to do to purchase it. It’s just a deal we have to work out.”

Barnes hopes that one day she and her husband, also known as “Shaky,” will be able to bring in the fare that was the hallmark of their former enterprise, country foods like beef, pork, chicken, steamed shrimp, crab cakes and even alligator meat.

“We’re going to eventually, hopefully bring everything in here,” she said. “If we can find the room we will set it up. The fresh meat and fish are probably going to be the last things we do because there are a lot of permits involved.

“You’ve got to crawl before you can walk.”

The Barneses have already brought some new items to Bill’s Hometown Grill, including smoked meats and country hams, and frozen items like butter beans, fried peas and frog legs.

“Stuff like that sold really well at Shaky’s,” Barnes said. “We’re trying to keep it country. We just really like country.”

In the meantime, the Barneses are continuing to learn the ropes to a business that has 13 full- and part-time employees.

“There’s a lot to learn,” Barnes said. “At Shaky’s, it was just us. But I really enjoy the crew we have here. Everybody is bonding, and I think it’s a good staff we have. We’re very excited.”