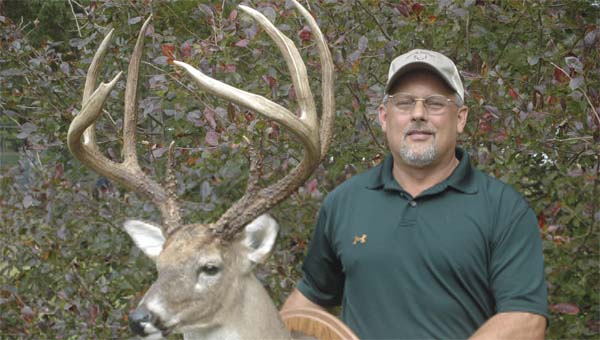 Delaine Babb of Suffolk set a new state record with this 8-point harvested in Southampton County in 2009. The deer, which scored a 199 0/16, was taken on the last day of the season.

COURLAND – Delaine Babb never expected to kill a big 8-point, let alone one that would set a new state record.

A 10-year-old from Smithfield set a new record for the biggest turkey in the eastern half of Virginia and the fifth biggest ever in the state. Joshua Hooker took his turkey in Southampton County.

As for Babb, it was until the last day of the whitetail season that he harvested his record deer while at Davis Ridley Hunt Club in Courtland. It scored a 199 0/16.

Babb said he saw three deer 300 yards away; the 8-point was the biggest. As they got closer, the smallest of the deer blocked the 8-point, making it difficult for Babb to get off a shot.

“He (the smaller deer) turned a little,” he said, clearing the way for a successful 21-yard shot with a 12-guage.

“It was unbelievable,” Babb said. “I never thought I would kill a deer like this, let alone set a state record. I keep thinking I’m gonna wake up (and it won’t be true.)”

State record-setter Dustin Heard, 12, of Suffolk was alone in a tree stand when he heard two bucks fighting. The larger of the two deer came within five yards of his tree stand.

“My dad had seen a 15-point before so when I saw him, I began counting (the points) really fast,” Heard said. “I said, ‘That’s the buck.’ I was petrified. I almost fell out of my stand (after taking it down with one shot.)

Christopher Martin of New Kent County can thank his wife for helping him set a new state record with a 225-pound, 8-point he took with his muzzleloader. Three days in a row, Brandy Martin saw the deer when she took the kids to and from the school bus.

“I had been hunting elsewhere, and she kept telling me, ‘He’s very nice,’” Christopher Martin said. “I took her word for it.”

The next day, five minutes after the bus driver dropped of his daughters, Martin spotted and bagged the deer.