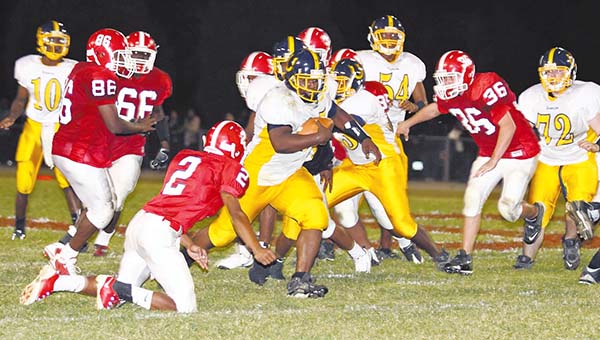 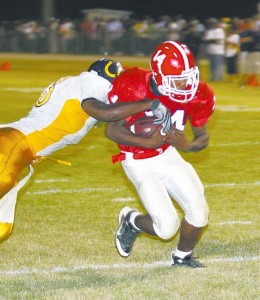 Franklin held on for a 42-23 win over Southampton, scoring 20 points alone in the fourth quarter before about 5,000 fans.

Leading the rushing for the Broncos was Melquan Mitchell with 64 yards followed by Lavon Evans with 51 yard. The Broncos had a total of 208 yards on the ground.

For the Indians, Saiquan Mason rushed for 136 yards followed by Jerry Wright with 63 yards. The Indians had a total of 249 yards on the ground.

The Indians on their first possession moved the chains four times and advanced the ball to the Franklin 2-yard line, but could not score as the Bronco defense stiffened for the stop.

The Indians scored on their second possession on a shotgun formation pass from Billy Nixon to Jason White. Shaqville Johnson booted the extra point, and the Indians led 7-6. It was their final lead of the night.

The Broncos struck back in the second quarter on a 44-yard touchdown pass from quarterback Trey Kigler to Grant. The Indians thought Grant was down, but he seemed to roll off the Indian tacklers and kept going for the score.

The Evans run was good, and the Broncos were up 14-7 at the half.

In the third quarter, Franklin’s Shaquan Cook picked off a Nixon pass and returned it 65 yards to the Indians’ 2-yard line. From there, Grant crossed the goal line again on a run. Mitchell scored on the 2-point conversion, and the Broncos were up 22-7.

Some of the 5,000 fans in the stands cheer on their team.

Southampton struck back in the third quarter on a 2-yard run by Jaron White. Mason scored the 2-point conversion to put the score at 22-15.

The Indians players and fans came to life on the kick-off as the ball hit a Bronco and bounced into the hands of DeQuante’ Winborne. The Indians failed to take advantage of the turnover.

The fourth quarter was the turning point as the Broncos pumped in 20 points to the Indians’ 8. With 10:50 left in the third quarter, Evans broke up the middle and crossed the goal line on a 45-yard run. Mitchell ran the 2-point conversion to put the at Broncos 28-15.

On the next Southampton drive, Nixon was picked off by Grant on the Indians’ 29-yard line and returned it for a Bronco touchdown. Martinez Hill attempted the 2-point conversion, but could not score. The Broncos were up 34 -15.

With the fat lady starting to sing now, both teams went to their benches, and the Broncos scored again with 6:07 remaining in the game on a Delvontae Boone 1-yard run. Tyrell Pope scored the 2-point conversion, and the Broncos were now at 42-15.

The Indians scored their last touchdown with 3:01 left in the game on a 1-yard run by Malik Ellsworth. Jamar Bell ran the 2-point conversion.