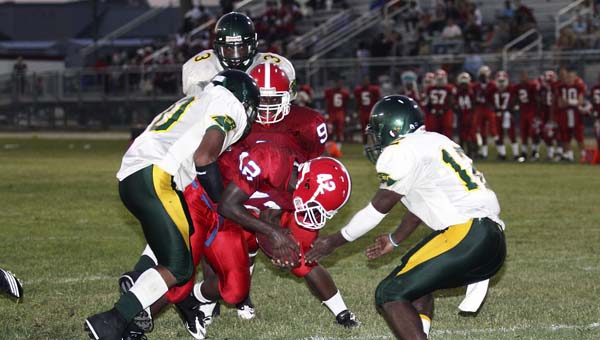 “It’s always been a big rivalry because of the closeness of the schools, and the kids now each other,” said Parker, who retired after last season as the Indians’ head coach after 22 years at the helm.

Southampton High has a larger student body than Franklin; the Indians are an A team and the Broncos are AA. The Broncos, however, have beaten the Indians the last two or three years, Parker said.

“Southampton dominated for a long time (before that),” he said.

Last season, Franklin defeated Southampton 28-13, earning 244 yards offensively to the Indians’ 104. The Indians had a hard time stopping Melquan Mitchell, who rushed for 112 yards on 18 carries.

Franklin will be coming off last week’s 53-0 win over Northampton during the Bronco’s home Tri-Rivers District season opener.

Southampton is coming off a 23-13 loss to Bruton, last year’s state runner-ups.

Franklin is 1-0 for the season, and Southampton 0-1

Broncos Head Coach Darren Parker always goes into the game with a winning attitude. His guys are healthy, and they’ve had a great week of practices.

“The kids are very excited about the game,” Parker said.

He looks at every week as a “brand new week,” particularly after the victory over Northampton.

“We have to execute and do things we did last weekend, but do them better,” Parker said. “That’s our main focus.”