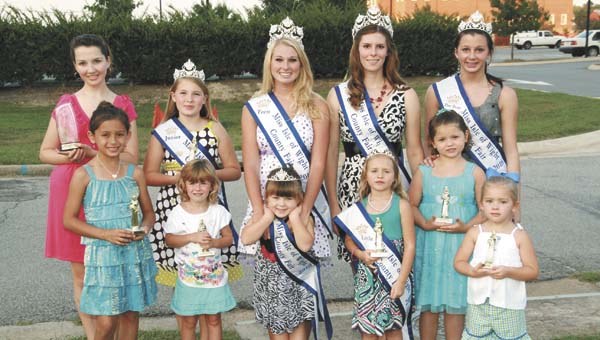 The 18-year-old daughter of Jeff and Rene Bartgis, she is a freshman at Christopher Newport University.

The queen and other royalty representing girls as young as 3 will appear at the fair, which runs from Thursday, Sept. 16, through Sunday, Sept. 19, at Joel C. Bradshaw Fairgrounds at Heritage Park in Windsor.

Two pageants were conducted this year because of increased participation.

The Wee/Little Pageant for girls age 3 through 7 had 20 participants.

The winner was Madison McKellar, 4-year-old daughter of J. Edward and Ericka McKellar of Windsor. Madison attends kindergarten at Isle of Wight Academy.

The 2010 Little Miss Isle of Wight County Fair Queen is Kylie Reese Kronewitter. Kylie is the 5-year-old daughter of Jason and Lacy Leonard of Carrollton. She attends kindergarten at Carrollton Elementary.

For the Wee/Little Pageant, the People’s Choice Award was given to Kaylee Wills. Kaylee is the daughter of Charles and Mellissa Wills of Windsor.

The Junior, PreTeen, Teen and Miss Pageant featured 32 participants ranging from age 8 through 22.

The 2010 Junior Miss Isle of Wight County Fair Queen is Katilynne Rose Atkinson, 10. The daughter of Mel and Kimberly Atkinson of Windsor, she is a fifth-grader at Windsor Elementary.

The 2010 Pre-Teen Miss Isle of Wight County Fair Queen is Allison Taylor-Kay Griggs. Allison, 13, is the daughter of Allan Wayne Griggs and Melanie Kay Kello. She is a ninth-grader at Windsor High School.

The 2010 Teen Miss Isle of Wight County Fair Queen is Alexa Rae Lilley. Alexa, 15, is the daughter of William and Gina Lilley of Suffolk. She is a sophomore at Lakeland High School.

The winner of the People’s Choice Award for Junior, Pre-Teen, Teen contestants was Caitlyn Brianna Delosreyes. Caitlyn is the daughter of Edwin and LuAnn Delosreyes.