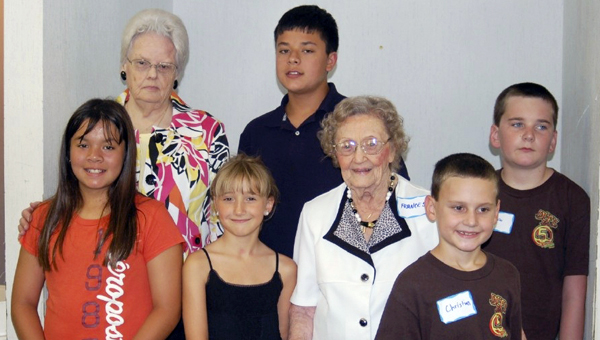 “We had a pretty good crowd,” said Simms, who organizes the annual event. “But there are a lot more of us out there. When we started the reunions this second time, the attendance was greater.”

Simms and a Blythe great-grandson, Earl Blythe, came up with the idea of the reunions following the dedication of a grave marker for their grandparents.

“The family cemetery had begun to look pretty bad, so we cleaned it up and ordered a gravestone for our grandparents’ graves,” Simms said. “Our grandfather, a Civil War soldier, had been captured and imprisoned during the war, so the government provided a CW marker for him.”

Simms said they polled the family after the ceremony and it was decided to start having an annual reunion.

The head of the Blythe clan, William Albert Blythe, returned home to Sedley in about 1866 after his imprisonment at Camp Lookout, Md., and married Nancy Drake Cobb. The couple had 16 children, raising 10.

The whereabouts of the other six, who died in infancy, are not known, according to Earl Blythe.

He serves as master of ceremonies and handles announcements, including the family history and recognition of older guests attending the reunions. For several years, Holt has been one of the oldest members; this year she was the oldest.

Simms, the second oldest, has always arranged the banquet, down to decorations for tables.

An antique lover, she made an arrangement of old-time butter making equipment for each table this year.

Then Simms made butter by shaking whipping cream in a jar until it turned to butter, the way her mother did.

After 45 minutes of shaking, the butter was made. Simms then served it with rolls to guests.