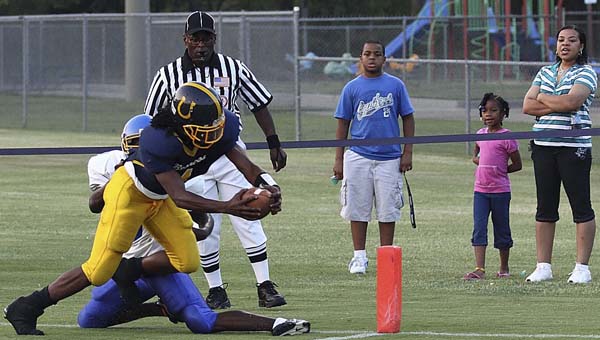 Franklin HIgh School's Melquan Mitchell scores on a 15-yard run in the first quarter of Wednesday night's game, which was rescheduled from Thursday due to Hurricane Earl. Three other local football games remain scheduled for Friday.

As of Thursday, high school football games in Wakefield, Courtland and Suffolk remained scheduled for this evening despite Hurricane Earl’s passing along the Virginia coast.

Meteorologist Tim Gingrich, with the National Weather Service in Wakefield, doesn’t believe there’s anything to worry about — players can expect a warm, dry night with little precipitation beforehand.

“We don’t expect too much rain in those areas through early afternoon Friday,” Gingrich said. “Wakefield and Courtland may see a trace. When you get closer to Suffolk, they may get 1/10 of an inch.”

Once the hurricane passes, temperatures are expected to hit the mid-90s, Gingrich said.

“From the last weather report I heard, we’re supposed to start seeing something around 2 a.m. Friday,” Parker said. “It depends on the weather.”

Football is usually played in the rain, unless there is lightning. If the field is too wet, the game also could be postponed, he said.

If that happens, Southampton will play Bruton for its Southside District home season opener at 7:30 p.m. Saturday.

Nansemond-Suffolk Athletic Director Betty Jean Riddick said if school is canceled today the game will be too.

“If we don’t have school, we cancel all activities at the school,” Riddick said.

The hope is to make up the home opener Saturday, however no time has been set.

“We have a youth group that plays their games (on the same field) so we will try to work around their games,” she said.

“I think the bad weather is going to miss us,” Rodgers said.