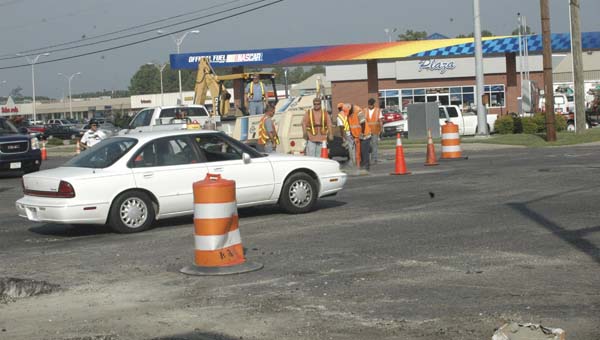 Motorists pass through the intersection at College and Armory drives, where a monthlong paving project continues. NICHOLAS LANGHORNE/TIDEWATER NEWS

There have been times when traffic was “a little tight,” but he hasn’t received any complaints.

Franklin resident Bob Joyner said he tries to avoid the intersection of College and Armory drives, but the construction hasn’t affected him otherwise.

“It’s a little bumpy, but that’s to be expected,” he said outside of the Walmart on Armory Drive Wednesday.

Rose Brothers Paving of Ahoskie, N.C., on Aug. 16 started the month-long project, which runs from College Drive to the U.S. Route 58 Bypass.

Workers have been removing the old asphalt and adjusting manhole, storm drain and water valve structures in the street. After the Labor Day holiday, Pace said the actual paving would begin.

“They should return on the (Sept.) 7th to start the paving, and they will pave at that point until the job is complete,” he said.

“We hope this storm will pass on by and miss us,” Pace said. “That way we’ll hopefully stay on schedule.”

The city is funding the $467,000 project jointly with the Virginia Department of Transportation.

Allgood memorial to be unveiled Saturday