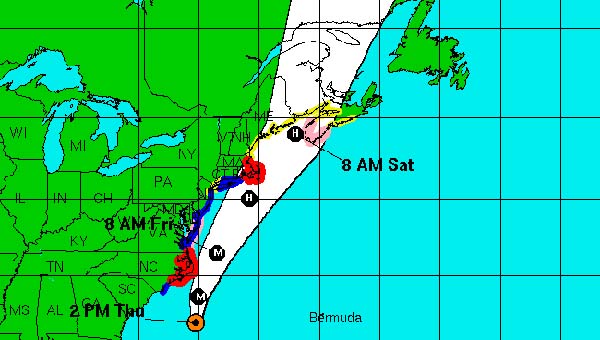 Projected path for Hurricane Earl as of 2PM Thursday

Hurricane Earl has weakened somewhat as it has move north along the East Coast on Thursday, though the National Hurricane Center still considers is a “large and powerful hurricane.”

With maximum sustained winds of 125 miles per hour, the storm was located about 245 miles south of Cape Hatteras, N.C., at latitude 31.7N and longitude 75.2W, as of 11 a.m., according to the National Hurricane Center.

The storm is now ranked as a Category 3 hurricane.

Its current track is north at 18 miles per hour.

The latest update says the hurricane should pass near the Outer Banks late Thursday night.

A hurricane warning is in effect from Bogue Inlet, N.C. to the North Carolina/Virginia, border including the Pamlico and Albermarle Sounds. The warning includes the area from Westport, Mass., around Cape Cod to Hull, Mass., including Martha’s Vineyard and Nantucket Island.

A hurricane watch is in effect from north of the North Carolina/Virginia border to Cape Henlopen, Del. Hurricane watches also have been issued as far north as Nova Scotia.

A dangerous storm surge is expected to raise water levels by as much as three to five feet within the hurricane warning area and the in the lower Chesapeake Bay. Near the coast, the surge will be accompanied by large and destructive waves. Within the tropical storm advisory areas, storm surges are expected between one and three feet.

Rainfall, totaling between two and four inches, is expected over portions of eastern North Carolina, including the Outer Banks, with isolated maximum totals of six inches in some areas. Totals of one to two inches are possible farther to the north along the immediate mid-Atlantic coast.

The next storm update is expected shortly after 5 p.m.