FRANKLIN—Lauretta Barr’s first attempt at cooking for her new husband turned out to be a disaster. 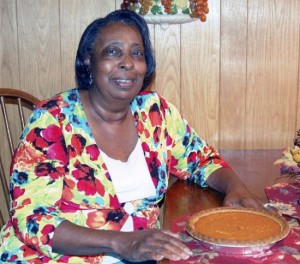 Not because the Spanish rice wasn’t good, but because he wasn’t used to “foreign cooking” and wouldn’t touch it.

“That’s right,” Barr said. “He even told me that I needed to learn to cook.”

“Actually, I knew the basics, but what he wanted was old-fashioned country cooking like he had when he was growing up,” she continued.

Barr took his advice. She paid attention to her grandmother, her mother and Aunt Louise, the latter two having been taught to cook by her grandmother.

Today, Barr seldom measures anything the traditional way, opting to use her grandmother’s way — by sight, a pinch of this and a dash of something else.

She tried her hand at fried chicken, greens from the garden, and what has turned out to be her famous sweet potato pie. This is all done from memory.

Barr finds it hard to use a cookbook, saying, “My grandmother never did, and I’ve cooked for so long her way, I just don’t need to.”

Today you’d never know the 65-year-old retired caregiver ever had a problem with cooking.

Following her first meal for her husband, Nathan, Barr settled into cooking country style. Soon he began to compliment her dinners, and she never received a complaint from any of her four children, she said.

In fact, even though the children are now all married and living elsewhere, they visit often to have a meal with her.

“And on holidays, the family meal is always at my house,” Barr said. “Sometimes there’s from 25 to 30 people spread out over the place.”

“They do help, though,” she added. “I cook the turkey with dressing and the ham, and they bring other dishes.”

Barr said it has always been this way, even when she was working.

“I’d come home from work and fix a big dinner for my family,” she said. “For the holidays I’d have to start preparing a few days ahead of time.”

Employed for nearly 30 years by the same family, Barr cared for the children and later, the parents of the Mackans of Mackans’ Office Supply in Franklin. She said she didn’t cook much there, but she did her share at home.

Sadly her husband passed away in February. Barr expects to continue with the family dinners, though.

What is the first thing you remember cooking: A cake with my grandmother. I was staying with her at her home in Capron, and she let me help her bake a cake.

What has been your worst cooking experience: When I first got married, I made Spanish rice for my husband. It turned out OK, but my husband wouldn’t touch it. He was used to country food, and this was foreign to him. He even suggested I learn to cook. This was a little upsetting for a new bride, but we survived it.

One ingredient you can’t cook without and why: Salt. It gives most foods a better flavor.

What is the most important thing you have learned about cooking: Take your time —don’t rush. When you rush, you make mistakes.

Who is the best cook you have ever known and why: My aunt, Louise Joyner. She didn’t have any children, so she cooked for the neighbors, her family and friends. She loved to cook and was always one of the first to visit a sick friend or relative with one of her homemade dishes. Of course she cooked liked my grandmother, who taught her, as well as my mother and me. But Aunt Louise had a knack for making a lot out of very little, and it was always good.

If you could eat one thing for the rest of your life, what would it be: Cabbage.

Recipe may easily be doubled.