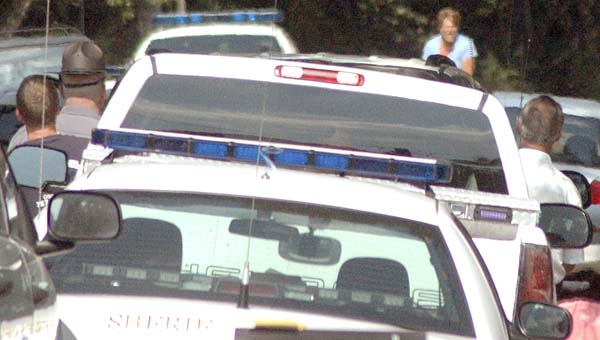 An unidentified woman (upper right), armed with a long gun, screams at police officers in Moreland Street moments before being immobilized by a bean bag round in Courtland on Tuesday. -- Charlie Passut | Tidewater News

COURTLAND—A woman armed with a long gun held authorities at bay for about two hours before being immobilized and taken away in an ambulance on Tuesday.

Capt. G. H. Drewery of the Southampton County Sheriff’s Office said the standoff at the end of Moreland Street began at about 1:30 p.m. He declined to identify the woman, but said she was 30 years old, was alone in a house during the standoff with police, and was armed with a long gun.

Both Drewery and Southampton County Sheriff Vernie Francis said the incident was under investigation by the sheriff’s office. Tactical units with the Virginia State Police assisted deputies during the standoff.

According to police scanner transmissions, authorities were in telephone contact with the woman several times. At 2:30 p.m., she was ordered to lay down her weapon and step out of the house at the end of Moreland Street, but she did not surrender.

Police said they could see the woman inside the house through the windows and the front door. At one point officers were startled to hear the sound of breaking glass, but then reported that the woman was going from window to window, breaking them. 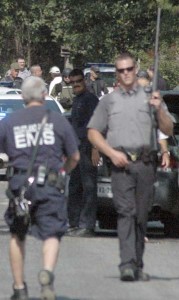 A deputy with the Southampton County Sheriff's Office (right) carries the long gun that an unidentified woman held during a standoff with police while paramedics and other officers approach the scene on Moreland Street in Courtland on Tuesday. -- Charlie Passut | Tidewater News

A gunshot was heard at about 3:25 p.m., then another about one minute later. It was not clear if the woman or officers surrounding the house had fired the shots.

At 3:35 p.m., a woman in a blue shirt appeared in the street and was seen screaming something at surrounding officers. Authorities then apparently fired a bean bag round at her and she went down to the ground. Officers then swarmed over her and one officer, a deputy with the sheriff’s office, stood up with the long gun and walked away from the scene.

Drewery confirmed that the woman was armed when she emerged from the house, and that officers had used a bean bag round to immobilize her.

Anthony Martinette said he was across the street before the standoff started. He said that authorities had approached the house to serve some type of paperwork when they observed the woman in the house with a weapon.

“They backed away and told all of us to get away from the house,” Martinette said.

Martinette also said that the woman, after she had emerged from the house with her weapon, had screamed “Shoot me! Shoot me!” at the surrounding officers, moments before being taken down by the bean bag round.

“She was lucky,” Martinette said of the authorities’ decision to use non-lethal force.

Father, 17-year-old charged in connection with shooting of family…