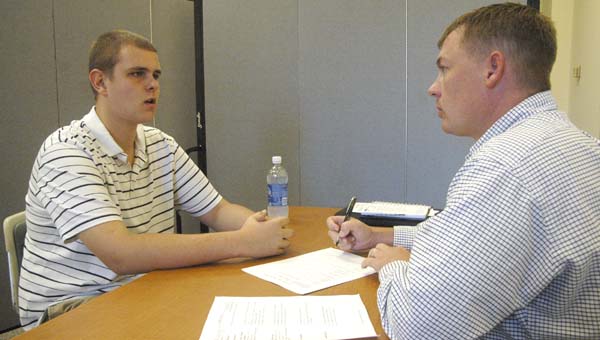 FRANKLIN—By late morning Tuesday, Tractor Supply Co. had interviewed more than 80 people for 14 to 16 full- and part-time positions at its new store in Franklin, which opens Oct. 23.
Interviews will continue from 9 a.m. to 4 p.m. today, Sept. 1, at Paul D. Camp Community College Regional Workforce Development Center.
“We have had a huge turnout so far,” said store manager Debra Smith. “We have gotten quite a few good applicants. With the recent closing of the (International Paper Co.) mill, we expected it.”
Franklin resident Steve Warrington was among those who lined both sides of the hallway, waiting for an interview.
“I’d love to get a full-time job if I can get it,” said Warrington, who was in line for about an hour. “But I’ll take whatever I can get, to be honest with you.”
Warrington said he’s been looking for a job for a little over a year, after working at the Cypress Cove Country Club and, before that, nine years with a tile company. He was laid off from the latter because of a slowdown in the housing market.
“It’s a good thing for (Tractor Supply) to be here,” Warrington said. “There are a lot of people here who need jobs.”
New hires, including two managers, will begin working at the end of September or early October to go through orientation, product training and to perform some store setup.
According to Smith, the beginning pay scale for the jobs is minimum wage — $7.25 an hour in Virginia — but a higher wage will be given to workers with more experience.
Jarvis Hunter of Suffolk also waited in line for an interview.
“I’d like to get a job doing what I’m doing,” said Hunter, who works part-time at Dail’s Home Center in Franklin. “I’ve been working with tractors for 20 years, I know all about the different parts.”
Asked about Tractor Supply coming to Franklin, Hunter said, “It’s a good thing. At least it gives somebody else a chance to get a job.”
According to its website, Tractor Supply, which is based in Brentwood, Tenn., is the largest retail farm and ranch store in the U.S., operating more than 800 retail stores in 40 states. Its stores sell work clothes, animal and pet supplies, power tools, riding mowers and lawn and garden products. Tractor Supply also specializes in agricultural fencing and livestock equipment.
When completed, the 19,097-square foot store in Franklin will be the second in the Hampton Roads region, after Gloucester. Currently, the nearest Tractor Supply store to Franklin is located in Roanoke Rapids, N.C. It occupies about one-half of a former Wal-Mart.