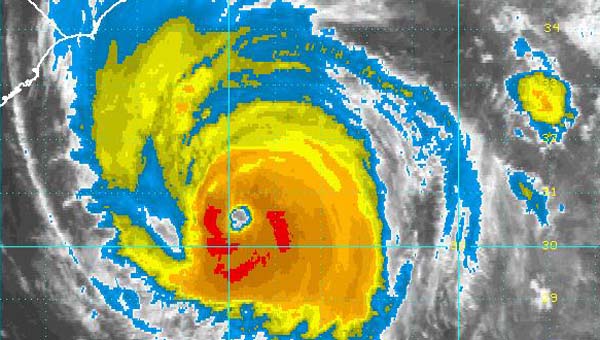 Satellite image of Hurricane Earl at 11:00 AM Thursday.

FRANKLIN—While any possible impact on Western Tidewater is still days away, the state on Monday asked residents to start preparing for Hurricane Earl.

“A small change in Earl’s forecasted path could bring a major hurricane to Virginia,” said Michael Cline, state coordinator for the Virginia Department of Emergency Management. “Virginia state agencies are getting ready for the storm, and so should residents.”

Tuesday evening, Earl was a category 4 storm with maximum sustained winds of up to 135 mph. Mike Montefusco, a meteorologist with the National Weather Service’s Wakefield office, said the storm could bring a few showers and some gusty winds to the area.

“It looks like all of the significant marine conditions and significant wind conditions will be offshore,” he said. The storm is expected to pass within 250 to 300 miles from the North Carolina coast before turning to the northeast and accelerating away from the area, according to Montefusco.

Southampton County Administrator Mike Johnson said the county is in “a state of increased readiness.”

“We’ve got our folks on alert to continue to monitor and we’ll be ready to pull them together if we need to,” he said.

Isle of Wight County spokesman Don Robertson said the county is “pretty much on standby.”

“We’re certainly encouraging people to continue to monitor the local media and to certainly pay particular attention to the weather report,” he said.

Franklin Fire and Rescue Deputy Chief Mark Carr said the city is taking some preparations, like checking equipment in advance of Hurricane Earl. But he doesn’t expect the storm to present a major problem.

“I don’t think Earl is going to present that much a problem to us at this point unless something drastically changes,” he said Tuesday. Carr suggests that residents have an emergency kit ready in case of any type of major incident—from hurricanes to snowstorms.

“We encourage everyone to be prepared to take care of themselves for 72 hours following any incident,” he said.

Like Carr, the state suggests that residents create a disaster supply kit with enough supplies to last each person at least three days. Essential items to include in the kit include:

• Food that doesn’t need electricity for storage or preparation

• A manual can opener (if kit contains canned food)

• Water (at least three gallons per person for drinking and sanitation)

• Battery-powered or hand cranked radio, a weather alerting radio with tone alert and extra batteries for both

WINDSOR—Authorities are looking for a man who attempted to break into a Windsor home on Tuesday while the occupant was... read more