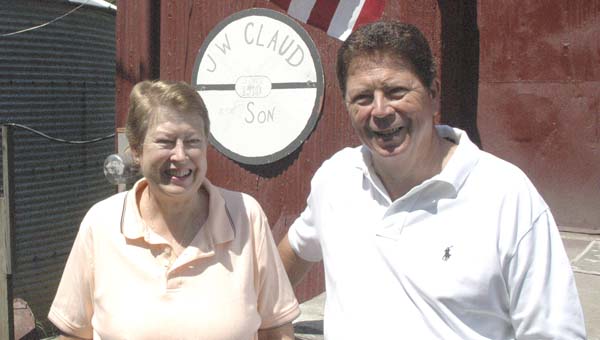 John M. Claud stands with his cousin, Claudette, outside the offices of J.W. Claud & Son, Inc. in Drewryville on Monday. The family business has been in operation for 100 years, having first been founded in Arringdale in 1910. -- Charlie Passut / Tidewater News

DREWRYVILLE—J.W. Claud & Son, a family enterprise spanning three generations, is celebrating its 100th year of being in business.
“It has always been, and continues to be, our intention to serve every customer like we would like to be served, with courtesy, honesty and respect,” John M. Claud, the grandson of company founder John William Claud, said Monday.
Claud said his grandfather founded the family business in 1910.
“There was a town about two or three miles west of here called Arringdale,” he said. “Back then, Camp Manufacturing had a lumber mill there to cut large tracts of timber. The men who worked at the mill also lived there.”
Claud said Camp had a commissary, a store to provide basic provisions, to service the mill workers at Arringdale. His grandfather worked there for a while, and then opened his own store across the railroad tracks.
The business moved to Drewryville in 1920. Claud said several men helped his grandfather run the store through 1937, the year his youngest son, Robert Daniel Claud, joined him.
Two years later, the Great Depression hit.
“Many businesses failed and many farmers were unable to pay their bills,” Claud said. “(My grandfather) extended credit to his loyal and valued farmers, helping them avoid foreclosure and retain their land.”
Robert Claud, John M. Claud’s father, was called into active duty when World War II broke out in 1941. He returned to work in the store after his service in 1946. Meanwhile another son, John Thomas Claud, helped his father run the store during the war.
“After the war years, business flourished,” Claud said. “(Our store) furnished food, clothing, fertilizer and farming equipment to farmers and their tenants. It was quite the practice to extend credit to their customers on strength of their personal promise to pay once a year when the crops were harvested.”
Claud said the store’s operating hours revolved around the schedule of the passenger train that served Drewryville at the time.
“That was how they established their working hours,” Claud said. “They opened around 7:30 in the morning and they would stay open until 10 o’clock at night, when the last passenger train came through. They had some long hours six days a week.”
Claudette Claud, John M. Claud’s cousin, added, “The railroad is what kept them going. That’s how they moved everything back then.”
Claud said his grandfather continued to manage the family business until his death in 1951. Robert and John Thomas Claud then ran the business together until 1958, when John Thomas had to retire due to poor health.
“From the 1930s through the 1960s, it was a general merchandise store,” Claud said. “They carried everything that you would need, from clothing to work shoes to hammers and nails and fences. They even had a full hardware department and a walk-in cooler.”
The business, which incorporated as J.W. Claud & Son Inc. in 1975, also started operating a peanut buying station.
Claud said he followed the footsteps of his father, Robert, in 1972 when he joined the business.
“Times were changing,” Claud said. “With new, modern, self-service grocery in nearby Emporia and Courtland, it was decided to put more emphasis on the fertilizer, chemical and peanut buying division of the company.”
Claud said the family business focused exclusively on agricultural supply after the grocery and hardware portions were sold to W.L. Chewning and his wife in 1977. His father retired after poor health and passed away in 1986.
Asked if a fourth generation would be taking over the family business, Claud said no.
“I have a son who has worked with me a couple of times, but I have discouraged him from wanting to do it,” Claud said. “Things change. There are not many small service centers still going. How long they will be going is another question. I just felt maybe he had better opportunities doing something else.”
Claud said the 2002 Farm Bill, which called on the federal government to remove price supports for peanuts, hurt the family business. Before the bill was enacted, peanuts were fetching $600 per ton. Afterward, the price fell to about $355 per ton.
“In a matter of three years, the number of farmers in the Drewryville area growing peanuts dropped to three,” Claud said, adding that the number of raw peanut pounds the company bought fell from 6 million to 800,000 pounds.
“(It was) not enough to maintain a viable buying point,” Claud said.
J.W. Claud & Son, Inc. now sells fertilizer, seeds and chemicals for the Meherrin Chemical Co. Row crop production is also another important part of the business today.
“As this year marks our 100th year of continuous operation, I would like to thank the Drewryville townspeople and area farmers who have supported us,” Claud said. “And thank you to my loyal and dedicated staff of Claudette Claud, Larry Turner and Casper Turner.
“It has been a privilege for John William, John T., Bob and (myself) to have known and provided service for our friends and farmers of the Drewryville community.”