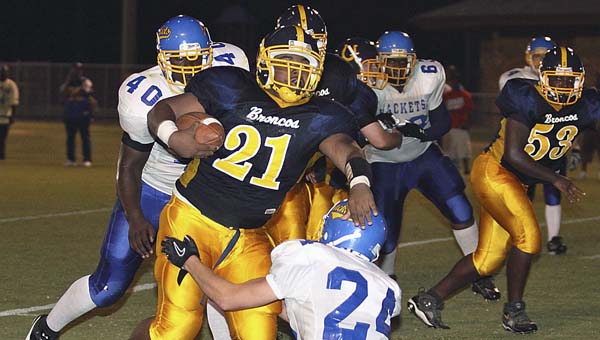 Franklin High School's Darian Lankford scores on a 5-yard run in the third quarter of Wednesday's victory over Northampton. Photo by Frank Davis.

“We had a great week of practice, to have to turn around and play this quickly,” said Bronco Coach Darren Parker. “God is always great.”

The game was originally scheduled for Thursday, but due to the possibility of Hurricane Earl being close by, it was changed to Wednesday.

In rushing, the Broncos’ ground game produced 220 yards. Hill led with 97 yards followed by Mitchell with 80 yards. In the air, quarterback Trey Kigler was one-for-two for 65 yards and one touchdown.

The Franklin defense held the Yellow Jackets to 141 yards on the ground and nothing in the air. Leading the defense on tackles were Jonathan Boone and Jalen Boone with nine tackles each. Jalen Boone’s twin brother, Justin, followed with eight tackles.

In the first quarter, the Broncos scored four touchdowns. Hill opened on Franklin’s first possession with a 4-yard run. After a 15-yard touchdown by Mitchell, Hill scored on a 50-yard run.

The Broncos’ last touchdown for the quarter came on a 25-yard fumble return run by Jonathan Boone. The first quarter ended with the Broncos up 27–0.

The Broncos took to the air in the second quarter and scored on a 65-yard pass from Kigler to Shaquan Cook. The first half ended with the Broncos up 34–0.

After halftime, the Broncos scored on their first possession on a 5-yard run by Darian Lankford. Bland booted his last extra point, and the Broncos led 41–0.

For the final two touchdowns, Franklin Head Coach Darren Parker had his team take the knee and not attempt the extra point kick.

The Broncos will hit the road for a 7 p.m. Friday, Sept. 10, game with the Southampton County Indians.