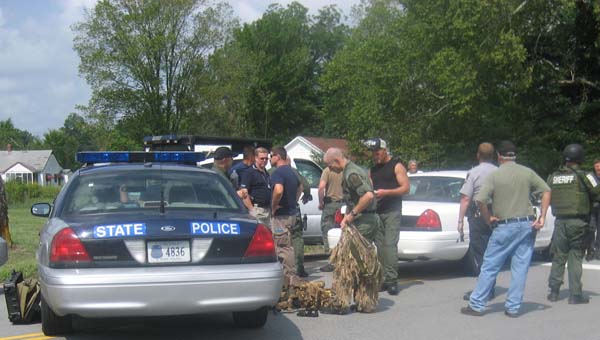 Capt. G. H. Drewery of the Southampton County Sheriff’s Office said the situation  started as an incident involving two brothers—one being a juvenile—at a home in the 15000 block of Grizzard Street at about 2:30 a. m.

The older brother was shot in the hand during the incident, Drewery said. He was taken from the scene to Southampton Memorial Hospital in Franklin where he has been treated and released.

It then became a barricade situation, according to Drewery. Both state police and Southampton sheriff’s deputies were on scene. Over a loud speaker, state police could be heard repeatedly saying, “We have a search warrant, come out with your hands up and surrender now.”

Traffic into Branchville on Route 186 was stopped periodically as officials worked the scene.

Just before 11 a.m., two people were seen exiting the front door of the home with their hands up.  Authorities were seen entering the home after the two people exited the home.

“We have not completed the investigation, but no one else was injured and we have taken two people into custody,” Drewery said. He declined on Saturday morning to identify anyone involved or any pending charges citing the ongoing investigation.

He said he couldn’t speculate about the cause of the shooting.

A neighbor, who didn’t want to give her name, described the brothers as “good boys.”

“I don’t have anything bad to say about them,” she said.