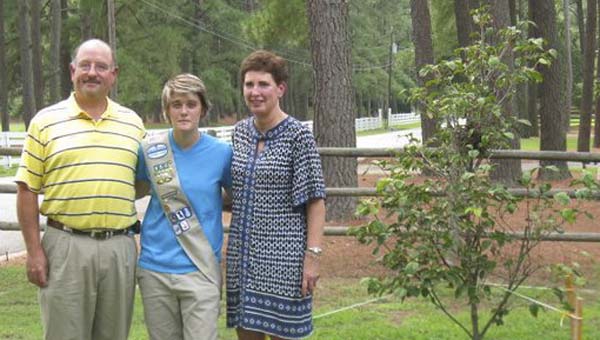 Ann Manning Cutchin stands with Kent and Jennifer Stephenson during the dedication of a memorial to the Stephensons' son, Carter, at Meadow Lane Park in Franklin on Sunday. Ann organized the memorial project for Carter (pictured at right) on her own.

FRANKLIN—The newly planted tree, a Japanese dogwood, is only about 5 feet tall.

It needs three tree stakes to keep it upright.

It doesn’t have any flowers and, like most baby trees, doesn’t make much of a shadow on the ground.

But some day the tree will grow to cover its corner of Meadow Lane Park, delighting passersby with the sights and smells of its flowers, its thick strong branches for climbing and sitting, and the shade of its lush leaves.

Ann Manning Cutchin hopes the tree will also give one pause to remember the little boy who used to run around this park and climb its trees.

About 30 people attended a ceremony on Sunday to watch Ann dedicate the tree and a stone monument at its base to the memory of her friend Carter Stephenson.

“I chose to do this project because at the time, Carter did not have a memorial for him and only him,” Ann Manning, a 15-year-old student at Nansemond-Suffolk Academy, said during her remarks on Sunday. “Being that this is the ‘Memorial Park’ in Franklin, I thought it would be appropriate to plant it here.”

Carter, who was 14, and two other scouts with Franklin Troop 17 — 13-year-old Jackson Fox and 12-year-old Luke Drewry — and assistant scoutmaster John Oliver, 43, were killed in a car crash along Virginia Route 35 in Sebrell on Nov. 5, 2006. They were coming home from a Boy Scout retreat in Blackstone.

“Death leaves a heartache no one can heal, but unconditional love leaves a memory in which no one can steal,” Ann Manning added on Sunday. “I know and each and every one of you knows that Carter Thomas Stephenson is with us now and for the rest of our living days.”

Although Ann Manning, the daughter of Carlton and Jackie Cutchin of Franklin, completed the memorial for her Silver Award project through Girl Scout Troop 650, she emphasized that wasn’t her primary motivation for doing it.

“I could honestly care less about that,” Ann said. “I am doing this because I love Carter and the Stephenson family very much.”

“Ann contacted us and said that was what she wanted to do,” Stephenson said Thursday. “I thought it was pretty amazing that she came up with this idea. We were very touched that she wanted to honor our son in this way.”

Ann Manning said Thursday that the memorial cost about $300 and the tree was $75. She raised money for both through a yard sale.

“Carter played in that park many hours, and there aren’t many trees out there that he didn’t climb, so I think it was very fitting that she wanted to do that,” Stephenson said. “It’s close to our homes, and it’s something we can enjoy for many years to come.”