COURTLAND—When Hugo Grant was born, William Taft was president and it would be another decade before women were guaranteed the right to vote. 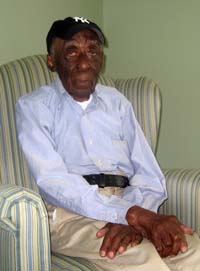 Hugo Grant, who turns 100 on Sunday, Aug. 29, has been a New York Yankees fan since he was teenager.

On Sunday, Grant will celebrate his 100th birthday.

“I never thought I’d get this age,” he said Thursday wearing his trademark New York Yankees baseball cap—he’s been a fan of the team since he was a teenager.

Grant said no one in his family lived to be 100, and he isn’t sure why he’s lived so long.

“It might be something I ain’t doing,” he said with a laugh.

Grant was born on Aug. 29, 1910, near Statesville, where he grew up. The current economic recession, he said, pales in comparison to the Great Depression.

Grant was working on a farm when the Depression started, but after things got bad, he moved to Suffolk to work in his uncle’s store selling wood.

He moved back to Statesville after about a decade in Suffolk, again working on a farm. He did that until the late 1980s.

R.E. Drake, who owns the farm Grant worked on, said Grant was a good worker, doing “some of everything that had to be done on the farm.”

“He stayed here 50 or 60 years…we both must’ve got along with one another somehow,” Drake said laughing.

About three and a half years ago, Grant, who never married, moved to the Courtland Health Care Center. Before that he was living independently.

Nowadays, Grant enjoys spending his time listening to “any kind of good music”—no one kind in particular, he said. He is also a member of Mt. Gilead African Methodist Episcopal Church in Franklin.

He also likes watching television — mostly sports and the news.

Grant, a man who has lived through two world wars and 18 presidents, still has a sharp mind, and he isn’t very pleased with the present condition of the country.

“Our country is messed up,” he said.

A birthday party is planned for Sunday afternoon with family and friends. They’ll celebrate with a Yankees cake. The team sent Grant a birthday present — he hasn’t opened yet — and the president and first lady recognized him.