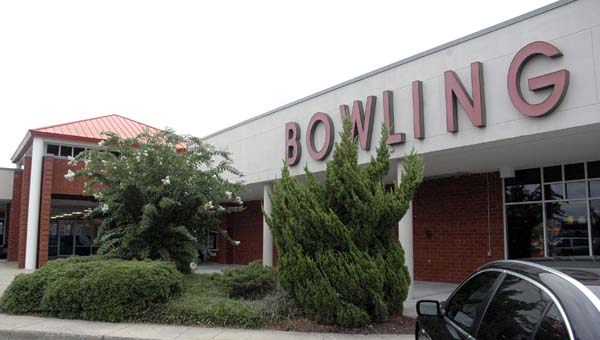 Kathleen Perry has sold the Franklin Bowling Center, located in the Armory Plaza shopping center at 1327 Armory Drive, to Chuck Guynn and Peggi Hendrix. The new owners will take over on Sept. 1. -- Charlie Passut | Tidewater News

Kathleen Perry said Friday she sold the business, located in the Armory Plaza shopping center at 1327 Armory Drive, to Chuck Guynn and his fiancée, Peggi Hendrix. The deal was finalized Thursday, and the new owners will take over Sept. 1.

Perry, who also owns Easton Bowling Center in Easton, Md., and serves on the board of directors for the Bowling Proprietors Association of America, said she would stay on in a consulting capacity during the transition.

Perry said Guynn and Hendrix will be excellent owners.

“He’s been active in the bowling center for a long time,” Perry said. “But he’s not only a bowler here, he’s a regional professional bowler; he bowls on the senior regional pro tour.”

Both Perry and Guynn declined to reveal the sale price for the business, which totals 2,700 square feet and has 32 lanes.

Perry purchased the bowling alley, then called the Franklin Playtoe Bowl, from Duane and Debbie Hagen in April 2008. She rented an apartment, and then a house, in Franklin while she and her husband, Jimmy, tried to sell their house in Woodbine, Md. Meanwhile, her new business got a major makeover, including a new arcade, bowling pins and machines, pizza ovens, ice machines, and heating and air conditioning.

But the Perrys were unable to sell their house in Maryland. Six months ago, Perry decided to actively start finding someone to buy the lanes from her. She said negotiations with Guynn and Hendrix have taken place for a few months.

“We really had wanted to move down here,” Perry said. “We could see ourselves living in the area. We were down here a lot, and we really liked the town, the atmosphere and the people. But (the bowling alley) really needs somebody local to help it get through and doesn’t have to spend additional money to live in the area.”

Perry said it has been a challenge lately to keep the business running.

“We have been truly struggling,” she said. “We have a core of bowlers that are faithful and bowl all of the time. They’re always here, their kids are here; they’re awesome. But you have to have people come in for things like birthday parties, church groups, picnics and family reunions.

“Everybody in town is struggling, and we’re perfectly aware of that. Hopefully more people will start to come out, because it did get so close to the place either not being sold or having to close.”

Both Perry and Guynn said rumors that the bowling alley was about to close reached fever pitch this week.

“We were getting between 30 and 40 phone calls an hour yesterday,” Perry said. “We had heard all of the rumors. We heard people say there were going to be tractor-trailers out front on Thursday night to pack everything up. I just laughed.”

Guynn added, “My phone has been ringing off the hook, and others have too. We could not say anything to anybody because the deal had not gone through. But (Perry) was going to close it. She was going to announce it.”

But Guynn said he has plans for his newest business, including hiring a couple of waitresses and adding to the approximately 10 to 12 employees already there. He also plans to add more game machines to the arcade. The pool table, pro shop, bar and lounge will all stay.

“We want to get everybody to come back,” he said. “People used to enjoy being up in the bowling alley. It was a meeting place where people enjoyed being around other people. I want it to be just like that.”